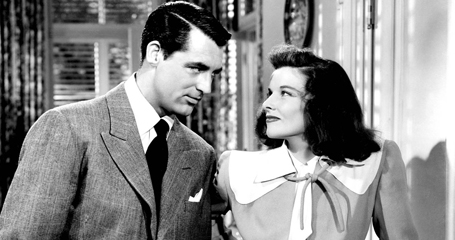 Kate the Iconoclast/Katharine the Icon

1940, U.S. Hepburn’s “box office poison” status of the late 1930s temporarily drove her away from Hollywood, but she returned triumphantly with The Philadelphia Story, a production she astutely engineered, earning herself a plum contract with MGM. A high-society comedy of manners, the film revolves around its heroine Tracy Lord (Hepburn) and her four men. Tracy is regal and strong-willed, a “goddess” worshipped rather than loved by her lackluster fiancée, her “unwomanly hardness” blamed for driving away her excessively drinking husband and displeasing her philandering father, whose indiscretions she does not forgive. The arrival of writer cum-tabloid reporter Jimmy Stewart, along with Tracy’s dashing, still-attached ex-husband (Grant), sets havoc—and the formation of an unexpected love triangle—in motion. Under Cukor’s direction the marvelous cast sparkles, most unforgettably in a drunken scene between Hepburn and Stewart that breaks the camels back.

“Hepburn's persona, beautifully explored here in all its wonder … and George Cukor's sensible, subtle, and lovingly unrushed direction of a firecracker script…result in a studio picture far deeper and richer than its whimsical surface style might lead you to believe.” –Jeremiah Kipp, SLANT Magazine

Kate the Iconoclast, Katharine the Icon is a three month, 12 film retrospective on screen legend Katharine Hepburn, who deftly designed a long career built on an iconic persona equal parts glamour and nonconformity. Beautiful, well-bred and college-educated, Hepburn’s on and off-screen behavior were marked by an independent style that challenged 1930s Hollywood’s ideas of femininity as much as America’s. Hers was an “eccentric brand of sassy feminism” (Andrew Sarris). She wore pants in “unladylike” fashion, troubled the waters with her leftist politics and hostility toward the press, inhabited characters whose willfulness undercut notions of womanly softness as much as her androgynous physical presence—and starred in the most beloved films of Classical Hollywood. She enjoyed a lifelong friendship with George Cukor, who directed her in nine films; teamed four times with the incomparably charismatic Cary Grant; and with Spencer Tracy forged a partnership in life and the movies remembered as one of the great romantic couplings of the Hollywood era.

“For a time Katherine Hepburn’s cinema was the cinema of a free woman.” –Andrew Sarris

October highlights the period between 1932 and 1938, during which the quick ascent of Hepburn’s rising star just as suddenly reversed. Proving too much for American audiences to handle, Hepburn was listed in 1938 as “Box Office Poison.” She retreated briefly to the stage, then charmed her way back into moviegoers’ hearts with The Philadelphia Story, which roundly delivers her comeuppance via its heroine, a character playwright Philip Barry modeled after Hepburn herself. The ensuing 1940s films share a common thread: the inevitable chastening of a too-bold woman who must be brought down a notch.