Order for
Your shopping cart is empty.
Order for

YOU BETTER SIT DOWN: TALES FROM MY PARENTS’ DIVORCE 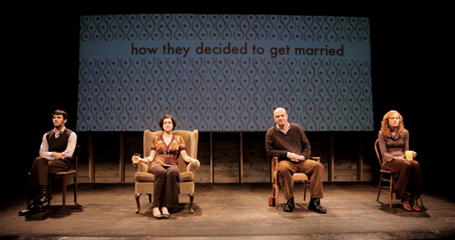 “My therapist told me to buy you a punching bag because I said, ‘what can I do to help my kids’ and she said, ‘go buy a punching bag.’”

You Better Sit Down is a hysterical account of marriage and divorce, based on The Civilians artists’ interviews with their sardonic, candid, and lovable parents. Four actors—each playing his or her own parents—are conduits of their parents’ stories and, sometimes inadvertently, of their own experiences of family division. At ArtsEmerson, a coda will be added featuring young artists from Emerson College.

About The Civilians This playfully clever theatre company that brought us In the Footprint: The Battle Over Atlantic Yards last January has toured extensively with presentations in over 40 cities nationally and internationally. The Civilians has also received Lucille Lortel, Drama Desk and Drama Guild nominations.

Meet the cast and company of HOME

ANNA BAKER originally from Vermont, Anna is in her senior year at Emerson getting her BFA in Musical Theatre. She just spent her summer as a resident company member at the Forestburgh Playhouse where she worked in each show of the season; favorites include Daisy in Biloxi Blues. At Emerson, Anna's favorite credits include Luisa in NINE and Olive in ...Spelling Bee.

MARLA DEMATOS (Assistant Director) Marla deMatos has recently performed with Rareworks Theatre Company, Kidding Around and the Mercutio Troupe, and will next be seen in The Shakespeare Society’s production of Three Sisters. She is very excited to get the chance to explore the directing side of things, as well as the world of investigative theatre.

MARIA HINOJOS Maria Hinojos is a BA Theatre Studies Major 2013 at Emerson College. She is currently involved in the show Woman of Sand: Testimonials of Women in Ciudad Juarez. She is delighted to make her ArtsEmerson debut and thrilled to work with The Civilians.

MARY HOUSE is a second year Theatre Education graduate student. She's performed in a number of musicals and plays in her hometown of Los Angeles, including You're a Good Man Charlie Brown, Charley's Aunt, Twelfth Night and The Princess and the Pea. She was a member of the singing group the Troubadours and performed improv at LA Connection.

DYLAN MANDERLINK is ecstatic to be performing in The Civilians' and ArtsEmerson's production of Home. Dylan is a sophomore BA Investigative Theatre for Social Change major and has been so grateful to have had the opportunity to experience and create investigative theatre with The Civilians. Previous Emerson credits include: Wiley and the Hairy Man (Fire Spirit), Honk! The Musical (Duckling), Grey Gardens (Jackie), and Naomi in the Living Room (Johnna). She is currently working on and performing in an investigative theatre piece with Emerson's Kidding Around to educate and raise awareness of the effects of bullying in public schools. Special thanks to the Home cast, The Civilians and the Performing Arts Department.

RAE MATTHIAS (Writing Assistant) is a senior at Emerson where she is pursuing a major in theatre studies and a minor in women's and gender studies. Initially interested in acting, Rae has moved towards other aspects of the theatre with a focus on experimentation and collaboration. Home is her first work with The Civilians.

KEVIN ROLAND is a sophomore BA Theatre Studies: Acting major here at Emerson College. In the past, he has been in plays, a couple of which are The Odd Couple: Female Version (Manolo), and Twelve Angry Men (Juror #8). He has also been in musicals such as Seussical the Musical (Mr. Mayor), Les Miserables (Enjolras), and Bye Bye Birdie (Albert Petersen). At Emerson, Kevin has been in a mini-musical version of Assassins (Leon Czolgosz). He is also a part of Acappellics Anonymous, one of two amazing acappella groups on campus. He is extremely excited to be a part of this amazing production, and hopes everyone enjoys the cast's hard work!

CURRAN RUSSELL (Theatre Education/Acting '13) has been seen at Emerson in such varied shows as Much Ado About Nothing, Machinal and Pippin, as well as numerous student films. He performed with Emerson Stage in the 2011 Newfest Readings. A York, Maine native, he has been seen at many professional venues around the Maine/NH seacoast. When not on stage, he enjoys teaching theatre to children and directing youth productions. He is humbled to work with such a talented company.

REBECCA SCHNEEBAUM is a junior BFA Acting major at Emerson College. She has also studied at the Michael Chekhov Actors Studio Boston. Most recently she collaborated in a workshop and the performance of Death and the Powers: The Robot Opera with the American Repertory Theater, directed by Diane Paulus. She is thrilled to have the opportunity to work with the Civilians and explore this kind of investigative and deeply inspiring theatre!

MATT TOLF has performed at Emerson College in The Adventures of Tom Sawyer and Painted Rain. He would like to thank his friends and family for their support. He could not be more excited and happy to be a part of Home.

ANDREA TZVETKOV has performed at the Watermill Center on the Eyerobot collaboration with Robert Wilson and the MIT museum. She has also played Marina in Pericles, Camille Desmoulins in Danton's Death, ensemble in Il Bidone, and ensemble in 365 Plays/Days. She has been training in Suzuki and Viewpoints with the SITI Company since 2006 and is currently a junior BA Theatre Studies and Writing, Literature, and Publishing major at Emerson College.

JASON PACELLA (Stage Manager) Jason Pacella is in the BFA Stage and Production Management program at Emerson College with the class of 2013. Previous Emerson credits include The Golden Age (ASM), Coming of Age (ASM), and The Actor/The Actor’s Nightmare (Asst. Production Supervisor). He has also worked with The Cape Cod Symphony Orchestra, The Cape Playhouse and Totem Pole Playhouse.

SEAN SWORDS (2nd Asst. Stage Manager) is a graduate of Port Jefferson High School in NY, where he worked on eighteen shows including Macbeth, Once Upon a Mattress and the Nutcracker. He is now a freshman at Emerson College as a BFA Production and Stage Management Major pursing a career in stage management. This is his first show with Emerson College and is very happy to be a part of the Emerson team.

Home: A Story Slam Presented by massmouth & ArtsEmerson: The World On Stage Sunday, OCT 23 @ 7PM Storytelling workshop with massmouth,inc. @ 6:30PM Max and Dylans Restaurant, 15 West Street, Boston FREE for ArtsEmerson members and You Better Sit Down ticket holders! ($10 general/$5 students) In the spirit of ArtsEmerson’s presentation of The Civilians’ You Better Sit Down: Tales From My Parents’ Divorce (playing OCT 25 – 30), ArtsEmerson and massmouth www.massmouth.com invite you to a story slam on “home.” Bring your story about the people and/or the place you call home. Like a poetry slam, a story slam is a performance based contest where volunteer judges choose the best true story on the theme. Anyone may sign up at the venue for a chance to tell their true, 5-minute, first- person narrative and a lucky 8-10 tellers will be chosen at random to perform their stories. Cast members from You Better Sit Down will serve as guest judges. To get your creative narratives flowing, massmouth,inc. storytelling professionals will lead a workshop starting at 6:30 p.m to help you focus on finding and crafting a story from your own life experiences .

YOU BETTER SIT DOWN

Who knew divorce could be so funny?

Approximately 90 minutes with no intermission