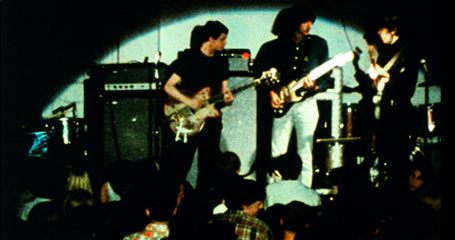 Program introduced by Steve Nelson, President and Co-founder of the online Music Museum Of New England, and manager of The Boston Tea Party in 1967 and ’68. The Velvet Underground in Boston (1967, U.S., 16mm, color, 33 minutes) During their 1967 tour, the Velvet Underground played a concert at one of the band's favorite, most-played venues, the Boston Tea Party, legendary rock music hall of the late 60s. Andy Warhol was there, shooting a film that has not been seen in forty years and which returns to Boston tonight in a newly restored print. A significant find for VU fans (it is one of only two known films with synchronous sound of the band performing live, and the only one in color), Warhol’s portrait of a legendary concert features “sudden in-and-out zooms, sweeping panning shots, in-camera edits that create single frame images and bursts of light like paparazzi flash bulbs going off mirror the kinesthetic experience of the Exploding Plastic Inevitable, with its strobe lights, whip dancers, colorful slide shows, multi-screen projections, liberal use of amphetamines, and overpowering sound” (Museum of Modern Art). Preserved through the Avant-Garde Masters program funded by The Film Foundation and administered by the National Film Preservation Foundation.

“Montez's Hedy is brilliantly detached from the melodrama around her, too self-consumed to notice or care. She pauses to pose no matter what the circumstance. Her response to a string of indignities — treacherous husbands, rude shopgirls, threatening surgeons — is as stoic as Margaret Dumont's to one of Groucho's importunities, and she sometimes casually turns these assaults to her advantage, as when she forces one of her tormentors (Woronov) to hold the mirror while she primps. Too, she stylishly endures Warhol's constant narrative ruptures, remaining grimly poised as technicians adjust the lighting and Factory gawkers stare at her from the sidelines. And she bravely endures the film's refusal to even consider the idea of verisimilitude — the ‘store’ is just a table in the Factory; the ‘court’ is a file cabinet and a table a few feet away.” – Gary Morris, Bright Lights Film Journal

“Filmed with the usual amount of Warholian chaos in a loft full of used furniture” Hedy “presents the adventures of Hedy Lamarr, who receives a face lift, is arrested for shoplifting and goes on trial to face the accusations of her five former husbands” (Callie Angell). Film Still Courtesy of the Andy Warhol Foundation

16mm Both films directed by Andy Warhol © 2011 The Andy Warhol Museum, Pittsburgh, PA, a museum of the Carnegie Institute. All rights reserved. 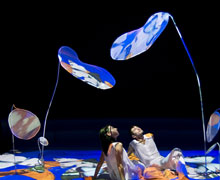 The wondrous "sensory gardens" of Farfalle (Butterflies) bring together theatre, contemporary art and technology - at the centerpiece is a special sensor-covered CCC (or “Children Cheering Carpet”) which interacts with dancers and audience in real time.