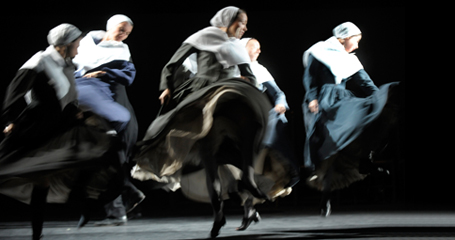 What do you get when you combine Pulitzer, Tony and Academy Award-winning writer Alfred Uhry, MacArthur genius director/choreographer Martha Clarke, traditional Shaker music, and sexual repression? Angel Reapers is a lively song and dance piece, inspired by the life of Ann Lee, founder of the Shaker movement.

"...a mesmerizing story of the Shakers told in song, dance and spare text: Rapturous.” –The Hartford Courant

Mother Ann, as she came to be known, was a visionary, mystic and powerful spiritual leader. Her categorical denial of sexuality and determination to erase it from herself and her followers inspires the stunning, rhythmic and often hilarious choreography in Angel Reapers.

"Clarke and Uhry keep the balance between spiritual expression and sexual repression on a taut wire...The dancers are superb, and they can, and do, act. They also sing beautifully.” –Classical Voice of North Carolina

About Martha Clarke and Alfred Uhry Martha Clarke has choreographed and directed for numerous dance, opera, and theatre companies. She has received the MacArthur Award, Drama Desk Award, two Obie Awards and the L.A. Critics Award, as well as grants from the Guggenheim Foundation and National Endowment for the Arts.

"The show — like the Shakers themselves — is presented simply, sparely and elegantly.” –The Hartford Courant

Join director/choreographer Martha Clarke and Pulitzer, Tony and Academy Award-winning playwright Alfred Uhry after the performance on WED, NOV 16 to discuss the creation of their new Shaker musical.

DIRECTED AND CHOREOGRAPHED BY:

80 minutes with no intermission