An Audience with Meow Meow

“This is musical theater as an act of subversion in fishnets and heels. Ferociously entertaining…Meow Meow stuns and delights!”

Beloved by everyone from David Bowie to Amanda Palmer, Meow Meow is the Mother Courage of performance, the Queen of Kamikaze Cabaret, and the Weimar-style camp-cum-comedian who is taking Boston by storm!You are invited to share a spectacularly intimate evening with international star and singing sensation, Meow Meow in her brand new musical, An Audience with Meow Meow. Boston! So close to Broadway! Expectations are always high for Meow but whatever may happen, she is a professional and will undoubtedly deliver to you, her beloved audience, a BIG FINISH…though she may need your help to do it. Helmed by Tony award nominated director Leigh Silverman, Meow Meow will sing and dance her way through a hilarious, poignant theatrical experience like no other.


Post-postmodern diva Meow Meow has hypnotized, inspired and terrified audiences globally. The spectacular crowd-surfing queen of song had her New York Pops debut in 2015 at Forest Hills Stadium with Pink Martini, and her London Philharmonic debut in 2013 as Jenny in Brecht/Weill’s Die Dreigroschenoper in Paris’ Théâtre des Champs-Élysées and London’s Royal Festival Hall. She sold out her Lincoln Center American Songbook Series and Sydney Opera House concerts, toured the concert halls of Australia with Barry Humphries and the Australian Chamber Orchestra singing 1920s works from Weimar Germany, and in 2014 performed contemporary opera with the L.A. Philharmonic in Andriessen’s De Materie and for Pina Bausch Company with their Fest für Pina 40 season in Germany, followed by an extended season of the award-winning original music comedy work Feline Intimate in London at the Southbank Centre and again a critically acclaimed season at London’s Southbank with her Apocalypse Meow. Meow starred on London’s West End in Kneehigh Theatre and Michel Legrand’s The Umbrellas of Cherbourg and in her own solo concerts at the legendary Apollo Theater. David Bowie, Pina Bausch and Mikhail Baryshnikov are amongst her curators, and she has created works for festivals from Shanghai to Wroclaw as well as performing everything from Schubert and Schumann with orchestra to touring with punk outfit Amanda Palmer and The Dresden Dolls. Named one of the Top Performers of the Year by The New Yorker, multi-award winning Meow Meow has been called “Sensational” (The Times UK), “Diva of the highest order” (New York Post), “The Queen of Chanson” by the Berliner Zeitung, and “A phenomenon” by the Australian press. She opened Berkeley Rep’s 2014 season with the new music theatre work An Audience with Meow Meow. Upcoming: Brecht/Weill’s Die Sieben Todsünden for Orchestra Victoria, and further collab- orations with the Australian Chamber Orchestra from Slovenia to Sydney Opera House, further performances with Oregon Symphony, with Pink Martini and the London Philharmonic. Meow’s albums Vamp and Songs from a Little Match Girl are available on iTunes.

Created by and Starring: 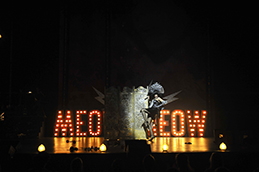 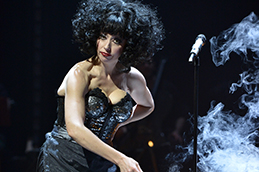 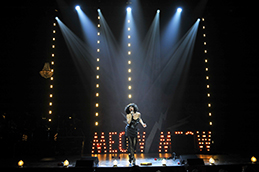 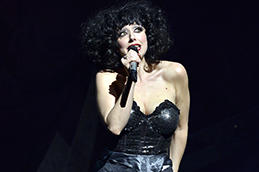 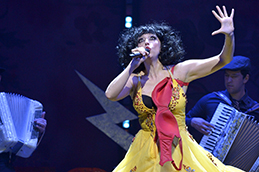 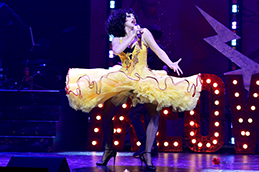 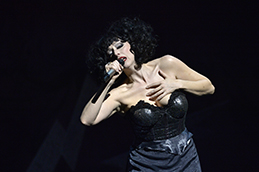 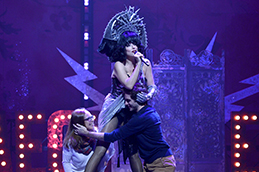 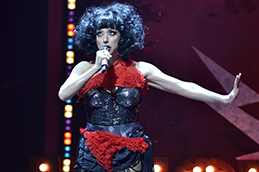 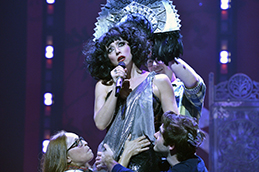 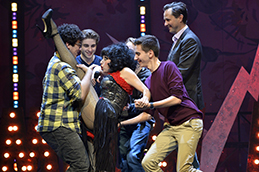 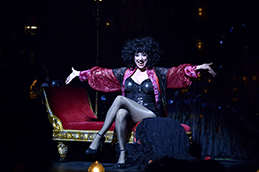 “A high-wire act in which the performer has invited you up onto the wire with her.”

“Part cabaret act, part performance art, part sendup of the trappings of celebrity and the conventions of show business, and, perhaps the most intriguing of all, part affirmation and heartfelt celebration of theatre’s power to lodge in our souls.”

“What I love about this show is that she took the business of show, and being an artist, and how we look at theatre, and experience art, and completely dismantled it before our eyes. We’re tricked into thinking we’re coming to see this crazy, hilarious cabaret performer, and then she strips all the art bare by really stripping herself bare, and makes you think about the beauty of art.”

“a beautiful singer, a gifted comedienne, a powerful actress, and a top-notch improviser”

“”An Audience with Meow Meow” will have you in fits of laughter one minute and in stunned silence as human truths are revealed the next. It is a splendid mash-up of cabaret, vaudeville, camp, and documentary about the life and purpose of entertainers.”

“It is possibly the performance of the season”

“The audience plays nearly as big a part in this show as Ms. Meow herself.”

“You’d better get your tickets soon”

“the result is great fun.”

“Meow Meow is without pretense, naked so to speak before us, as she puts herself out there without a net”

“an adventuresome admixture of kamikaze cabaret, burlesque, stand-up comedy, theater of the absurd and social commentary all mixed up and baked in a beautiful pie.”

“From her entrance to her spectacular and invasive exit, she defied expectations.”

“invigorating and intoxicating as cat nip.”

“This is musical theater as an act of subversion in fishnets and heels. Ferociously entertaining…Meow Meow stuns and delights!”

“Imagine Dame Edna crossed with Hedwig and Ute Lemper in a gleefully bawdy lounge act…There’s no denying the allure of Meow Meow’s purrfectly calibrated diva persona. The Weimar-style vamp-cum-comedian fancies herself the ‘Mother Courage of performance art.’ Armed with an impressive voice and limber stage antics, she seems to be giving her all to tickle us, and that’s hard to resist.”

“A comic who draws roars from pratfall, subtle glances, punchlines and sensuality”

“She’s bawdy and brash, tender and vulnerable; she’s graceful and klutzy, commanding and helpless. She’s a singer who hits every vocal nuance, whether serious or satiric; a high-energy dancer who could probably double as a contortionist; a comic who draws roars from pratfalls, subtle glances, punchlines and sensuality. She calls herself Meow Meow and – need I say this after that lead-in – she’s wonderful.”

“She’s a picture of alluring grace one moment and a klutz clambering up on stage the next, with the funniest way of getting up out of a split that I’ve ever seen.”

“I took my 16 year old grandson and we both loved it! Really wonderful, goosebumps and all.”