“I haven’t heard singing this divinely inspired since Cynthia Erivo, Danielle Brooks and Jennifer Hudson tore it up in the Tony-winning revival of The Color Purple.”

A story of family, love and forgiveness.

Detroit teenagers BeBe and Cece Winans experience the ultimate in culture shock when they leave the comfort and safety of their already-famous family to join Jim and Tammy Faye Bakker’s Praise The Lord Network in Pineville, North Carolina. The televangelist couple becomes an unlikely surrogate family as the siblings rapidly rise to television stardom. After the duo achieve unexpected fame with a PTL performance of a remake of the hit song, “Love Lift Us Up (Where We Belong),” they encounter the seductive lure of celebrity and they establish life-long friendship with rising pop star Whitney Houston. Ultimately, BeBe must learn to reconcile the temptations of stardom and fortune with the things he ultimately values more.

Born For This: A New Musical brings the legendary artist’s story to life with acclaimed new music and lyrics by BeBe Winans that has audiences rising from their seats in thunderous ovations. A wildly funny yet deeply emotional journey toward self-discovery, Born For This is the family-friendly and universal story for anyone who has ever yearned for something – for anyone who is looking to find their purpose in life.

2 hours 30 minutes, including one intermission

BENJAMIN “BEBE” WINANS, the inspirational R&B and gospel vocalist and six-time GRAMMY® Award winner is the seventh child and youngest male of the Detroit based first family of gospel music. Teaming with his younger sister, Priscilla “CeCe”, the duo first began crossing lines as “adopted children” of Jim and Tammy Faye Bakker on the PTL television show.

BeBe & CeCe are the first true Christian crossover artists to hit the mainstream. They appeared frequently on national television — from The Arsenio Hall Show to Good Morning America to The Oprah Winfrey Show — where they have taken their message and presented it in a way that touched, moved and inspired wide audiences. BeBe and CeCe are the first brother and sister to have a star on the Hollywood Walk of Fame.

On their first tour, Whitney Houston sang background for the siblings — proclaiming herself their “sister” and setting the tone for her own special career. BeBe & CeCe have nine successful gold and platinum recordings and in 1995 they began to explore their solo endeavors.

Since then, BeBe has become known as an inspirational, R&B, and popular vocalist, songwriter, and producer, renowned as the breakthrough artist to bridge the language of his roots in the church with a chart-topping, award-winning career spanning audiences universally throughout all genres.

Along with his seven solo albums with guest appearances from friends as disparate as Eric Clapton, Stevie Wonder, David Foster, Anita Baker, best friend Whitney Houston and members of the Winans family, BeBe is known for his jaw-dropping performances on some of the most important and star-studded musical specials of the past decades. BeBe, with his sisters, brothers, parents and on his own, has achieved an iconic status with the audiences he has moved and encouraged through the Winans’ brand of popular inspirational song.

He was an Executive Music Producer for the OWN Network’s latest scripted series, Greenleaf; host of his own radio show on the Heart & Soul Channel (68) on Sirius/XM Radio Networks on Sunday Mornings (9am ET/7am PT); author; actor in motion pictures including friend Denzel Washington’s, The Manchurian Candidate; and star of productions such as starring alongside Chaka Khan on Broadway in Oprah Winfrey Presents The Color Purple.

In addition to his other projects, BeBe Winans is currently an Ambassador for Metro World Child, an organization committed to providing hope and building futures for children living in adverse conditions in metropolitan areas around the world.

CHARLES RANDOLPH-WRIGHT is a playwright, screenwriter and director. He directed the Broadway and West End mega hit Motown: The Musical and its national tour. Other theater directing credits include the Pulitzer Prize-winning plays Ruined and Sophisticated Ladies at Arena Stage (where he was an inaugural resident playwright), Through The Night at The Geffen and Off Broadway, the 75th Anniversary international tour of Porgy and Bess, Love/Life at Lincoln Center (with Brian Stokes Mitchell), the national tour of Guys and Dolls (starring Maurice Hines), Cabaret Verboten at the Mark Taper Forum (with Bebe Neuwirth and Roger Rees) and the world premieres of the plays Tough Titty, Akeelah and the Bee, and the musical Senor Discretion Himself. Randolph-Wright is the author of the plays Blue (starring Phylica Rashad and Diahann Carroll), The Night is a Child (starring JoBeth Williams), Cuttin’ Up, Love in Afghanistan and co-author of Just Between Friends – Bea Arthur on Broadway. He directed the award-winning film Preaching to the Choir, and has written screenplays for HBO, Showtime, Disney and Fox as well as the Showtime series Linc’s. For television he has directed Greenleaf, Lincoln Heights, South of Nowhere, the music special America America, and the “Freestyle” football commercial for Nike.

Randolph-Wright started his career as a performer. His credits include the original Broadway production of Dreamgirls as well as Hill Street Blues and Melrose Place among others. He studied acting with the Royal Shakespeare Company in London and dance with the Alvin Ailey School in New York City.

Randolph-Wright’s productions have received numerous awards, including NAACP Image, Helen Hayes, Ovation, Audelco as well as GRAMMY and Tony nominations. He is the recipient of the S.C. Medal of Honor in the Arts, the Creative Spirit Award, The Pasadena Playhouse Theatrical Diversity Award, and the Paul Robeson Award from Actors’ Equity. For more information, visit Randolph-Wright.com.

LISA D’AMOUR is a playwright and inter-disciplinary artist and one half of the Obie Award-winning performance duo PearlDamour. Her plays have been produced by theaters across the country, including MTC’s Samuel J. Friedman Theatre on Broadway, Playwrights Horizons, Clubbed Thumb, (all in NYC); Steppenwolf Theatre (Chicago); Woolly Mammoth Theatre (Washington, D.C.); and the National Theatre in London. Lisa’s Detroit was a finalist for the 2011 Pulitzer Prize in Drama. She is the recipient of the 2008 Alpert Award for the Arts in theater, the 2011 Steinberg Playwright Award and is a recipient of the 2013 Doris Duke Performing Artist Award. 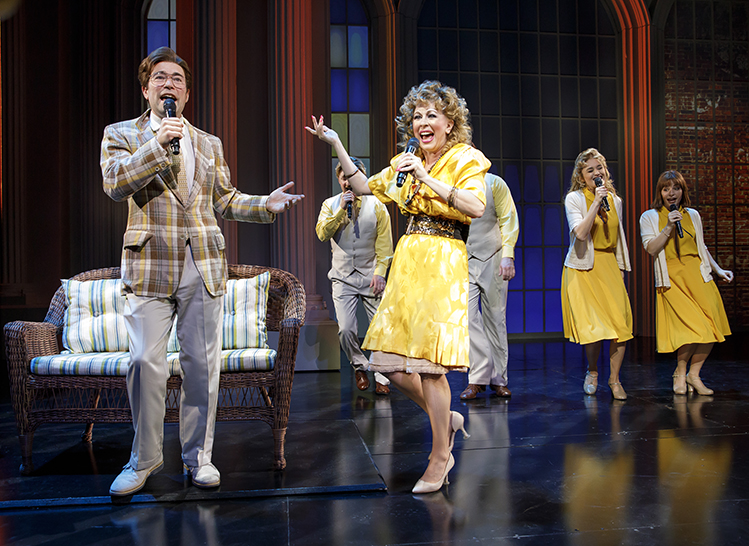 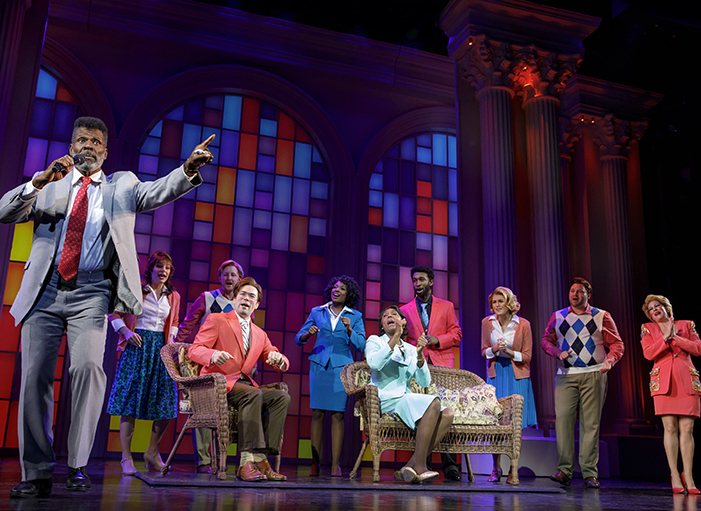 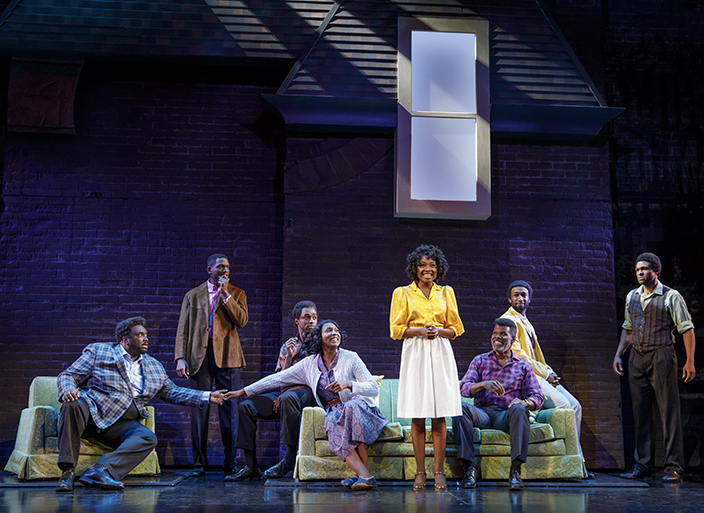 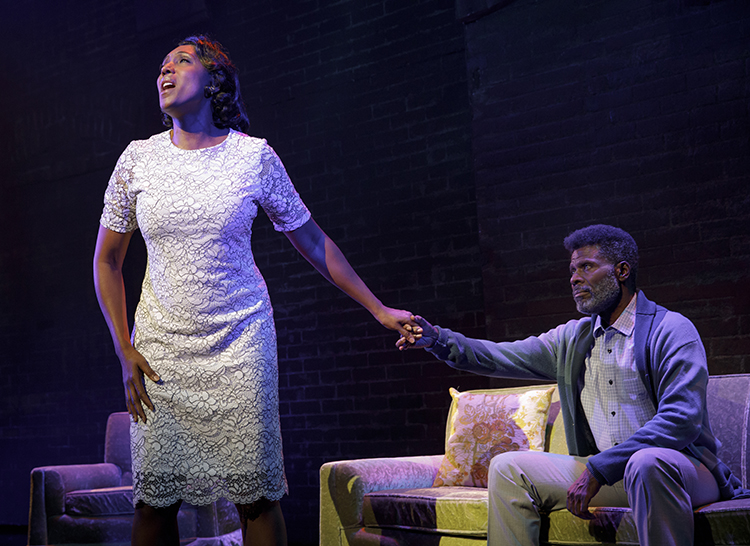 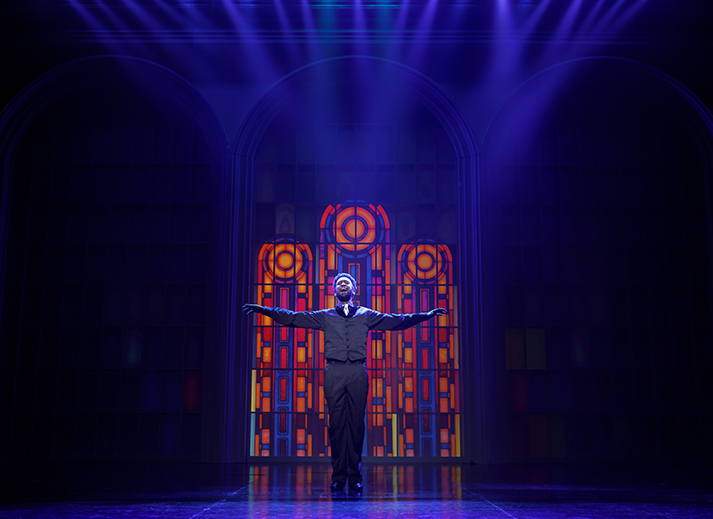 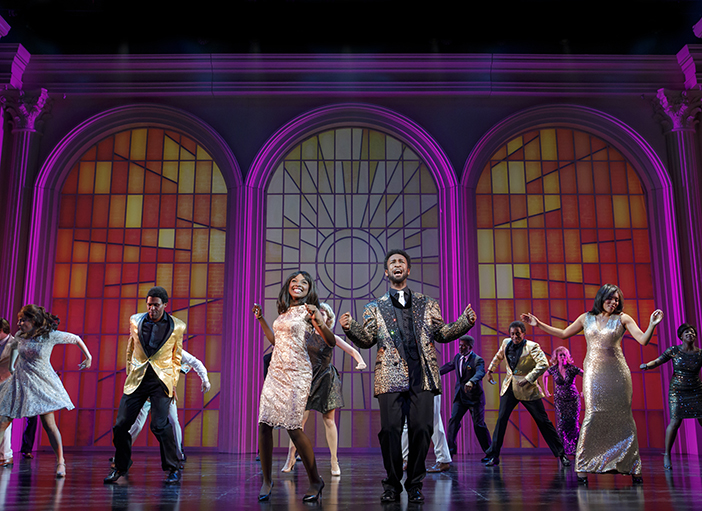 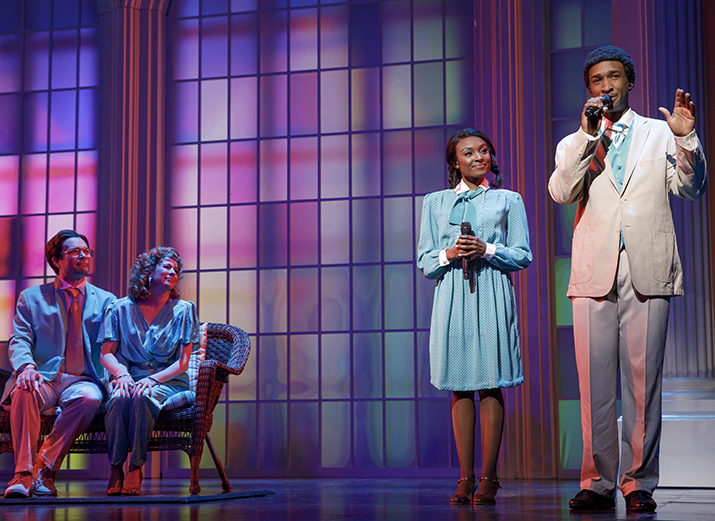 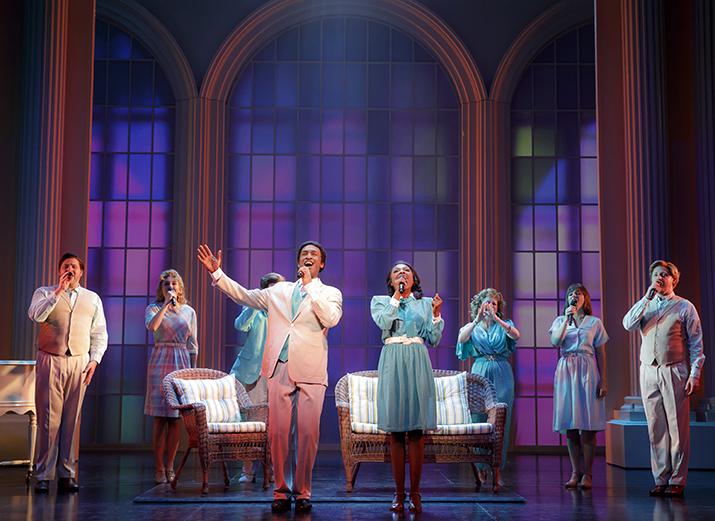 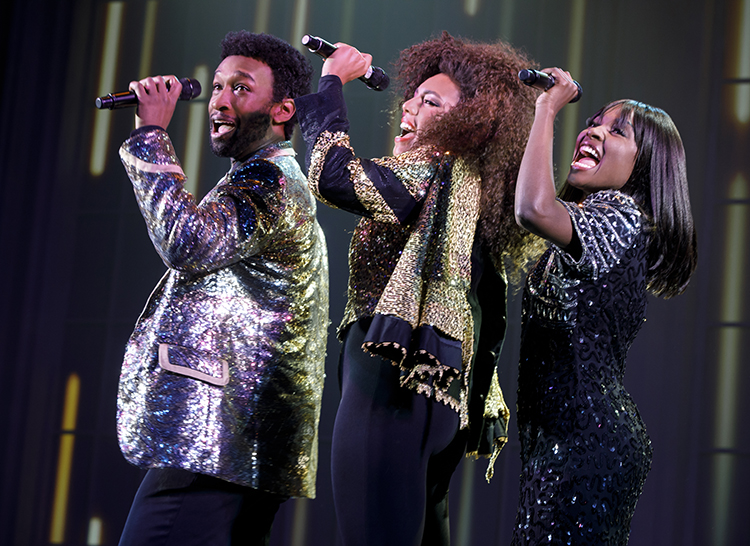 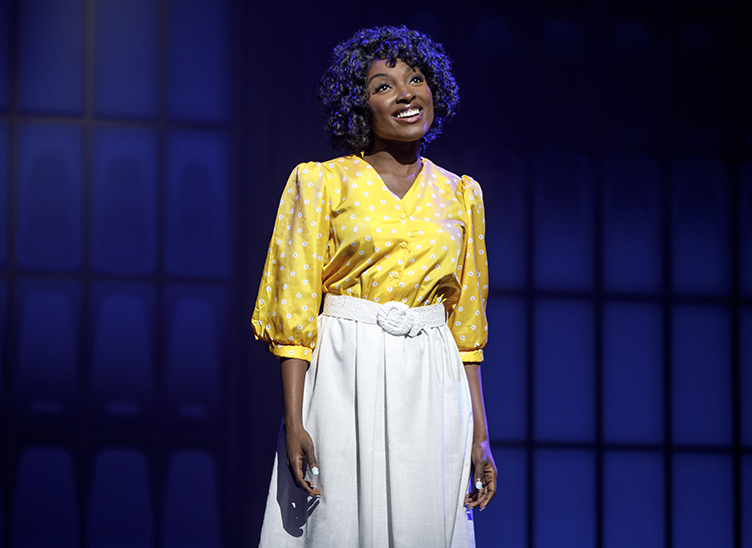 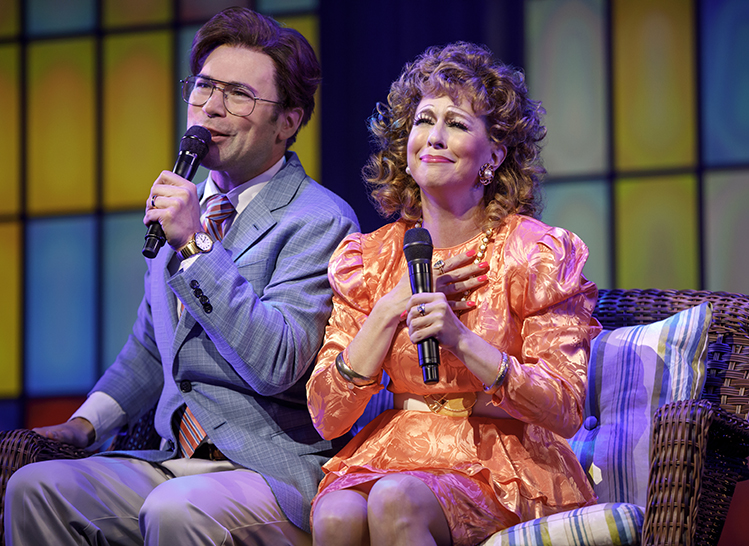 “The songs range from soft pop to fiery gospel, and the singing is excellent. This is a musical with a capital M.”

“Thrilling standouts like the rocking gospel song ‘I Got a New Home’ (led by Milton Craig Nealy, in the role of Pop Winans) and the sweet and powerful ‘Seventh Son’ (a solo by Nita Whitaker, playing Mom Winans) all but stop the show, and uplifting songs ‘Gotta Keep Movin” and ‘Book of Life’ fill the house with a joyous spirit.”

“A positive, uplifting story that is balm for our troubled spirits.”

“Brought me to my feet with its vitality, soul-searing vocals, and dynamic cast and performances.”

“The show has instant musical verve and cred.”

“The cast is pure dynamite”

“If the reception by theater-goers at a recent performance is any indication, “Born For This” is finding its audience during its Boston run.”

“Great staging, spectacular lighting, imaginative props and a live band…I give this colorful, magnificent and compelling production five out of five stars.”

“You’re not likely to find a more consistently entertaining musical on Boston stages this year than Born for This.”

“A powerhouse score delivered by an extraordinary cast combined with a very funny script are sure to make this show an overwhelming crowd-pleaser.”

“This play not only tackles difficult and timely subject matters, but it does so with great staging, spectacular lighting, imaginative props and a live band! Colorful, magnificent and compelling….five out of five stars.”

“The standing ovation-worthy talent on display at the Emerson Cutler Majestic Theatre-the show’s Hub venue-have the voices and the moves to make it in New York.”

“I imagine the rest of the show’s run will carry the same celebration of humanity and of searching for what one was born for.”

“This performance dredged up a childhood nostalgia from deep within me.”

“It is wonderfully engaging, replete with laugh-out-loud humor as well as deeply poignant moments.”

“This stellar, pitch perfect cast of 20, received thunderous applause after each song, including a variety of Jaw-dropping solos.”

“This family-friendly, wildly funny, yet deeply emotional journey toward self-discovery is a universal story for anyone who has ever yearned for something, or, is looking to find their purpose in life.”

“Its message is transcendent: if you have a dream, follow it, and have faith that everything will be resolved in time.”

“The vocal range of every cast member is truly unbelievable, and the notes and harmonies throughout the show are simply superb.”

“Born for This has voices that could convert even the most secular theatergoers into true believers.”

“I haven’t heard singing this divinely inspired since Cynthia Erivo, Danielle Brooks and Jennifer Hudson tore it up in the Tony-winning revival of The Color Purple.”

“From Mom and Pop Winans to their gospel-singing offspring, the Detroit Winans were a family born to entertain. Born For This: The Musical gives L.A. audiences ample reason to applaud their gifts.”

“An open-ended odyssey of what it is to balance spirituality, family, success, and loyalty. Not out of duty, but out of joy.”

“Might just end up in Times Square. Yes, the show is that good”

“A terrific night of entertainment, with a little soul thrown into the mix for good measure”

“There’s no end to the impressive talent on display in Born For This .”

“I attended last night and it was one of the best plays I seen in a long time the Characters every last one was outstanding the play was good from beginning to end.”

“I attended opening night!! The production was FANTASTIC…..funny, moving and transparent. That song Seventh Son nearly transformed the play into a revival. A must see!!”

“This play is amazing! You definitely need to buy a ticket.”

“It moved me to tears. It’s about the human experience with the ups and downs expressed in song and dance. It’s real and human and makes you feel better at the end of the show. Bebe is a real talent and an American institution. The music and the voices of the actors are worth every penny of it. Highly recommend.”

“Just saw a preview performance of #BornForThisMusical at ArtsEmerson, and the production was amazing! Thanks for sharing your story BeBe Winans and reinforcing the idea that “we’re all born for a purpose”. Seeing this musical has uplifted me to find my own.”

“Born for This was phenomenal! Please #Broadway, take note! The script, production quality & caliber of talent is off the charts!”

“First Look at Born For This was exhilarating. A great story of Bebe & Cece’s journey. Fantastic music, and singing along with some great talented actors. Tammy Faye is hilarious and her costume changes are amazing. Overall a Great musical. A Must See!”

“Born For This at ArtsEmerson is phenomenal.”