“Brilliant … Boundary-shattering … Forget about Cirque du Soleil. Rarely is there an ensemble that can so stunningly give a nod to tradition before blowing it off for something more inventive.”

Five of the most appealing guys you’ll ever meet masterfully manipulate juggling clubs, drum kits and even bath towels!

Machine de Cirque, a new Quebec City circus company, presents a show for all audiences that is wildly acrobatic, poetic and humorous. Sometimes comical, sometimes nostalgic, these wacky characters masterfully manipulate various props such as a teeterboard, juggling clubs, drum kits, and even bath towels. They do not hesitate to reveal themselves — ready to scour their souls as well as their bodies — to make you laugh, to move you, and especially to dazzle you. This show will make you stand up and cheer for humanity.


Machine de Cirque is a non-profit organization whose mission is to gather various players in the art world and technology field to produce circus shows. The organization relies on the excellence of its productions and the professional development of its members and employees. It promotes the exchange of ideas and cooperation with other cultural organizations in the Quebec City area to develop local talent and create local and regional expertise in the field. It promotes visits by international specialists to the region where resources can be shared with the local cultural community. Machine de cirque is aiming for the world stage and through its productions, strives to become an exemplary ambassador for Quebec circus art around the world.

The Company was founded in 2013 through the efforts of Vincent Dubé, president and general manager. It came to life at research and creativity sessions in 2012 and 2013 involving jugglers and acrobats Raphaël Dubé and Yohann Trépanier, as well as percussionist Fred Lebrasseur under the artistic direction of Vincent Dubé.The creative process evolved into a public performance on February 15, 2013, that went beyond all expectations. A new Company with its own artistic imprint and identity was born! In the summer of 2013, the acrobatic duo of Maxim Laurin and Ugo Dario joined the team. The premiere of the Company’s first production was on May 21, 2015, at the Théâtre de la Bordée in Quebec City.

This project is supported in part by an award from the National Endowment for the Arts. 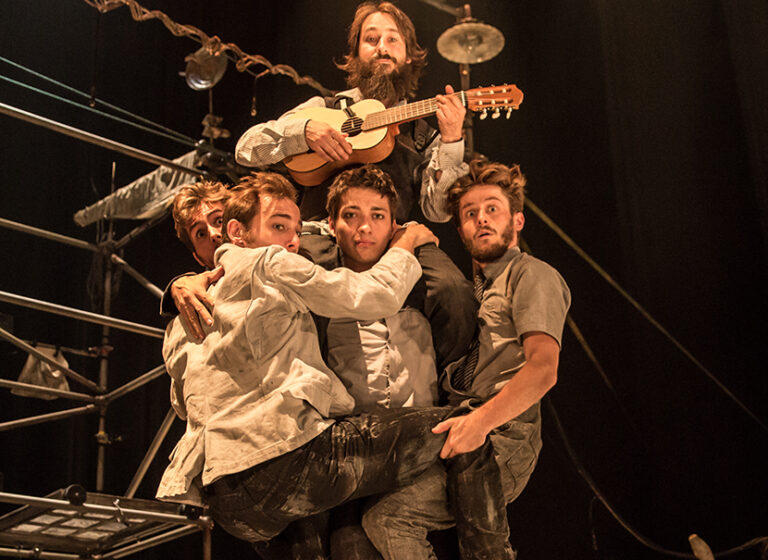 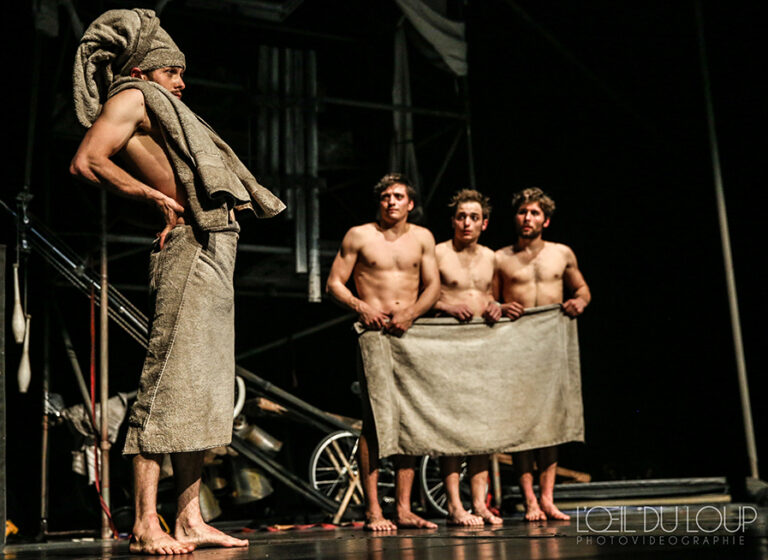 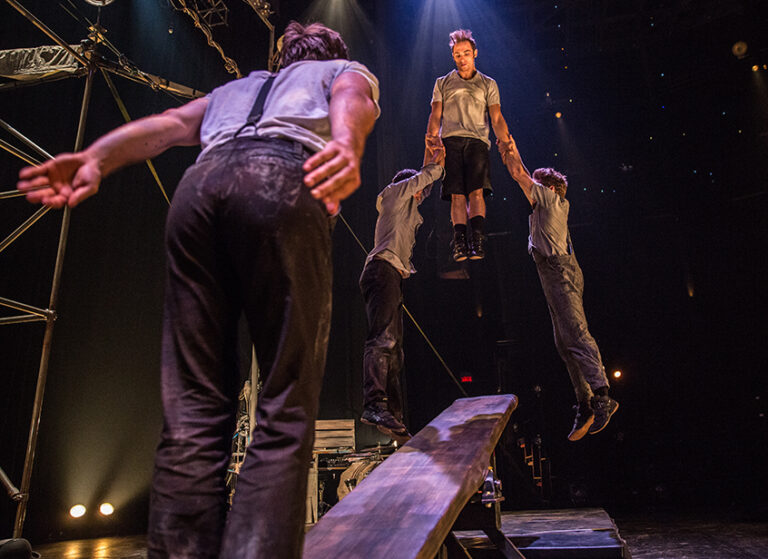 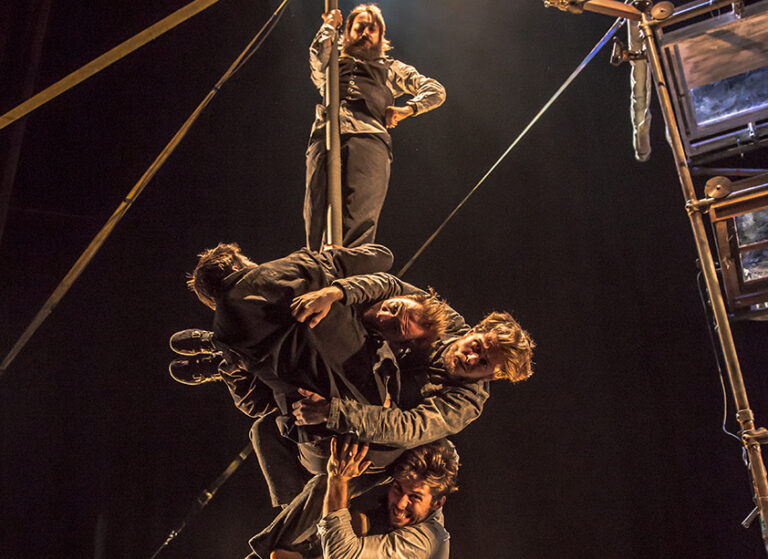 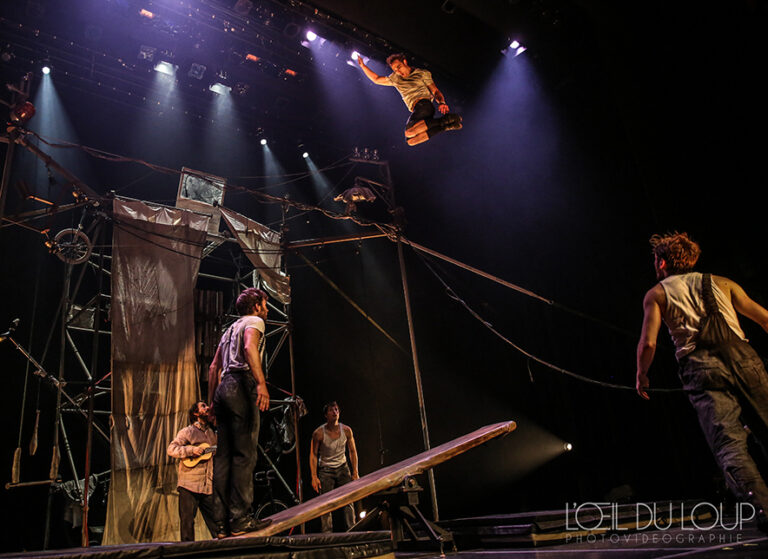 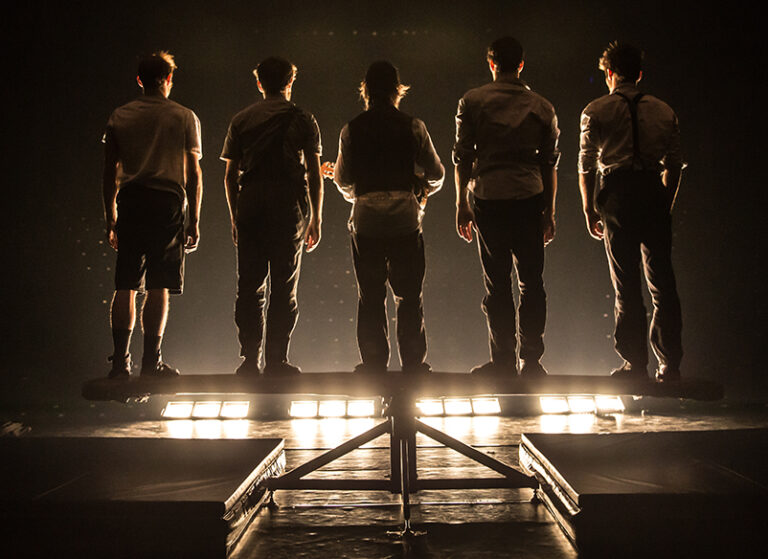 “IMMENSELY GIFTED PERFORMERS. The ensemble is constantly upping the ante. Your mouth will be agape at times. At other times you’ll likely find yourself wearing a goofy smile as a quartet of high-spirited circus artists and one energetic percussionist team up to deliver AN INSPIRED PERFORMANCE OF ACROBATICS AND BROAD COMEDY.”

“INTOXICATINGLY EUPHORIC! There’s everything here: the great acrobatic feats, he comedy, the sincerity, and terrific music! I FOUND MYSELF BEAMING LIKE AN IDIOT – I WAS JUST SO HAPPY TO BE THERE.”

“The towels were all that kept them from being in the ‘all together’ and me from having a heart attack.”

“I know energy cannot be created or destroyed– but I’m betting the laws of physics were somehow violated.”

“Machine de Cirque is a talented group of artists… even when only wearing bath towels.”

“wacky, endearing characters who have a knack for improvisation”

“MADCAP FUN! In just ninety swiftly-passing minutes, this quintet manages countless feats that defy description. The perfect antidote to electoral stress. The towel scene alone is the funniest, bawdiest, and most brilliant visual ever conceived. HEAD FOR THE THEATER WHILE THERE’S STILL TIME.”

“If someone looked at me the way Yohann Trépanier looks at a bicycle, I could die happy.”

“You GUYS this show was soooo amazing!!”