“You haven’t heard Mozart until he’s been played on marimbas.”

South Africa’s celebrated Isango Ensemble triumphantly returns to Boston with a reprisal of Mozart’s classic opera, The Magic Flute. This timeless story follows a young prince as he tries to win the love of the princess; but will the Queen of the Night’s gift of a magical instrument be enough to help him accomplish his quest? You’ve never experienced the iconic tale quite like this, brought to life with marimbas, oil drums, inventive design, and bold energy. It’s Mozart reimagined and transformed by internationally celebrated Cape Town artists and musicians.

When this joyous production took Boston by storm in 2014, The Boston Globe declared it to be “delightfully witty and full of invention…[an] ingenious mix of Mozart’s 1791 opera and contemporary African culture.” If you’ve been waiting for an opera that makes you want to stand up and dance, then you won’t want to miss the experience of Isango.

2 hours 5 minutes, including a 20 minute intermission


Isango Ensemble is a South African theatre company that draws its artists mainly from the townships surrounding Cape Town. Isango’s stage productions and films have played to sold-out audiences across the world and have received numerous international awards. Isango’s productions reimagine classics from the Western theatre canon, finding a new context for the stories within a South African or township setting, thereby creating inventive work relevant to the heritage of the nation. Isango intends to further develop this process by building a truly mixed audience, reflecting and uniting a diverse South African nation.

Adapted and directed by:

THE MAGIC FLUTE – A SYNOPSIS


Mozart’s classic opera, The Magic Flute, has been completely re-imagined, transformed and translated into multiple languages (including English, Xhosa, Zulu and Tswana) by the Isango Ensemble— but the story remains the same! Before you get swept into the magical world created by this brilliant South African troupe, brush up on the plot of this classic story:

Tamino, a young traveler who is passing through the realm of the Queen of the Night, is being pursued by a fire-breathing beast. He cries for help and faints with terror. Three Ladies—warriors of the Queen—hear his cries and spear the beast. Seeing how handsome the young man is, they go to tell the Queen what happened. Papageno, a bird catcher, is trying to lure birds into his net using his whistle. As Tamino regains consciousness, the birds are scared away. Papageno is a natural improviser and he claims credit for killing the fire-breathing beast. The Three Ladies reappear and punish Papageno for his lie by locking his mouth with a padlock. They show Tamino a picture of the Queen’s daughter, Pamina, whom they say has been kidnapped by an evil man—Sarastro. Tamino falls in love with the picture and promises to rescue the beautiful girl. The Queen of the Night arrives and urges a very frightened Tamino to keep his promise to rescue Pamina. To help him, he is presented with a Magic Flute. Papageno’s padlock is removed and he is ordered to help Tamino and given a set of magic bells. Both instruments, bells and flute, have the power to help the owners and to change evil into good. Three spirits materialize. They send the Ladies to sleep and offer to guide the men to Sarastro’s camp. Papageno and Tamino are pointed in the right direction but get separated. Papageno by chance happens upon Pamina with her jailer, Monostatos. Rescuing Pamina, Papageno shows her a picture of Tamino, and she falls in love with him. Tamino meanwhile has been led by the Spirits to the outside of the camp. He meets a Comrade of Sarastro who tells him that Sarastro is not evil but good. In his confusion and despair, Tamino plays the Flute and is answered by Papageno’s bird whistle. He runs in the direction of the sound but misses the escapees. Monostatos recaptures Papageno and Pamina, but Papageno plays his magic bells and Monostatos is seduced by their enchantment. As they make to escape again, Sarastro’s arrival is announced. Pamina tells Sarastro she was escaping from Monostatos, partly because he attempted to rape her. Monostatos, who has managed to capture Tamino, demands that Sarastro put the intruder to death. Sarastro is angered at the behavior of Monostatos towards Pamina and has him imprisoned instead. He then orders that Tamino attempt various trials to prove he is worthy of Pamina’s love. Papageno reluctantly accompanies him.

At a meeting of the elders, Sarastro proposes that Tamino undergoes initiation into their Brotherhood. If Tamino is successful in the trials, Sarastro proposes that he will hand joint power to both Pamina and Tamino. The elders are at first outraged that a woman should jointly rule over them, but after some hesitation they agree to the plan. The first of the trials undertaken by Tamino and Papageno is a trial of silence. Pamina appears and innocently tries to speak to her lover; he refuses to answer her words of love and she leaves broken-hearted. Papageno, however, cannot manage to keep quiet and he fails the first trial. The Queen of the Night appears and orders Pamina to kill Sarastro, giving her a knife for the task. Sarastro’s Comrades try to restrain the Queen but are killed by her soldiers as she escapes. In spite of this, Sarastro still pursues his doctrine of forgiveness and reconciliation and refuses to seek revenge. Heartbroken and depressed at Tamino’s rejection, Pamina attempts suicide but is restrained by three Spirits. Having completed the trial of silence, Tamino is reconciled with Pamina, and she undertakes to complete his trials with him. Together they complete the second trial, the trial of fire, and go on to the third trial, the trial of water. At first it appears that they have drowned, but they are revived and Tamino completes his initiation. Papageno, upset at his failure with the trials and disheartened by his failure to find a woman, contemplates suicide but is stopped by the three Spirits who introduce him to the girl of his dreams, Papagena. Guided by the wicked Monostatos, the Queen of the Night makes another attempt on Sarastro’s life but fails. Sarastro holds out his hand to her offering reconciliation; she refuses and leaves as the Comrades celebrate the dawn. 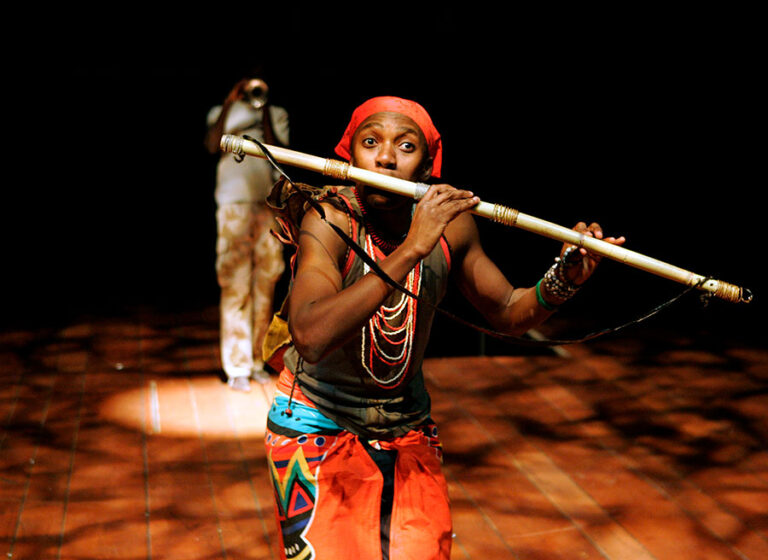 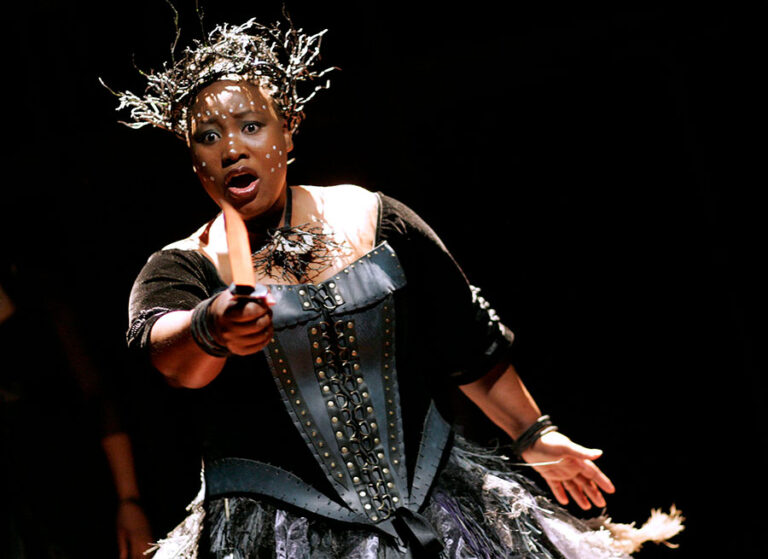 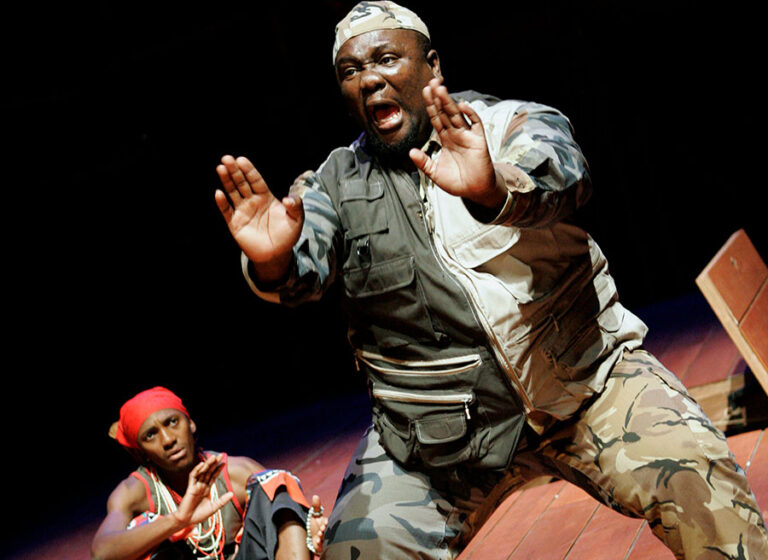 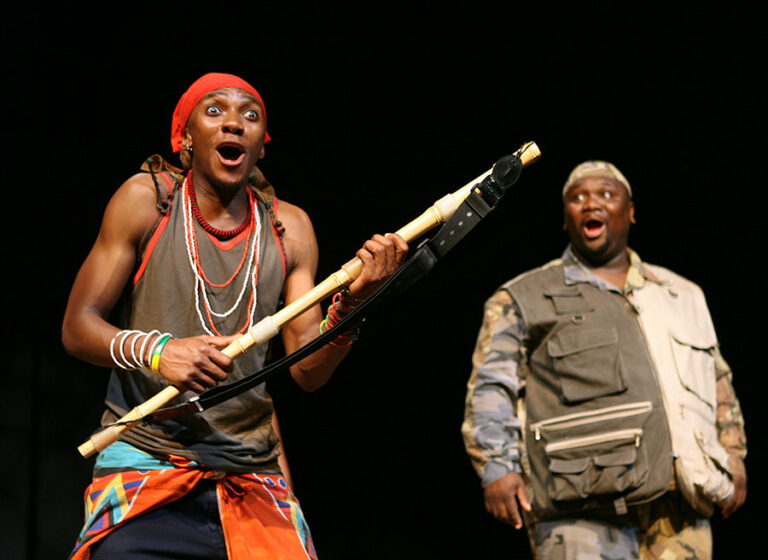 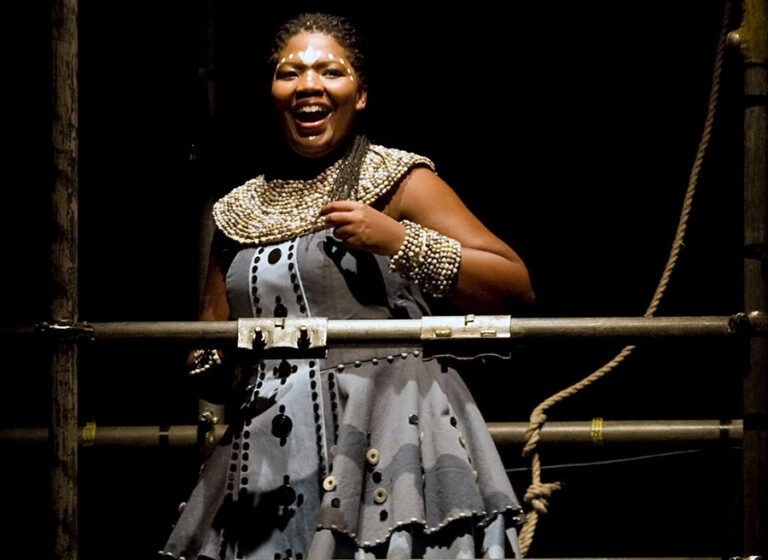 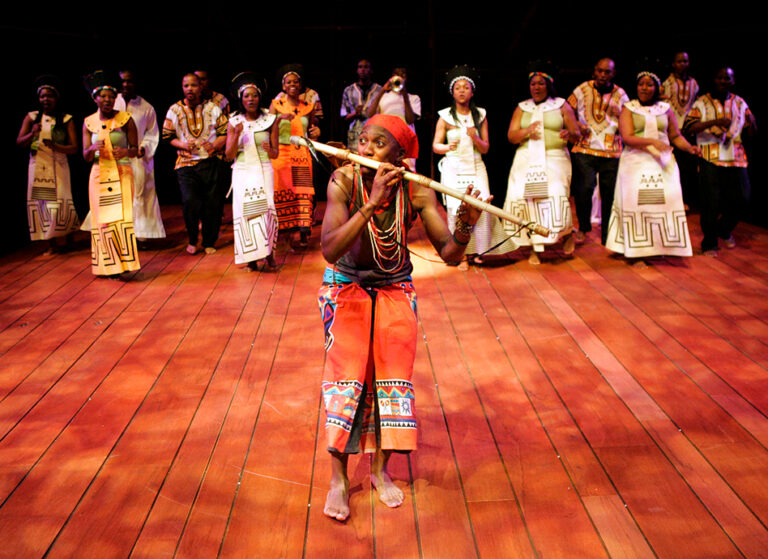 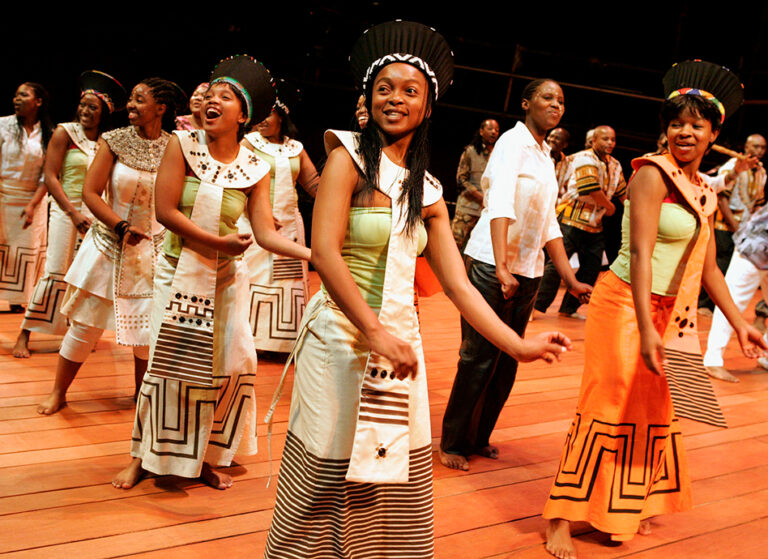 “Isango has created a global village, where cultures blend and joy unfolds.”

“The vocal talent and musicality of Isango Ensemble is astounding.”“There is a spiritual fusing of traditions here that adds a whole new dimension to what we consider opera.”

“This morality tale was given a whole new lease on life.”
” If you think you’ve seen the definitive “Magic Flute” sometime in the past, think again. This was the “Magic Flute” of the present and the future.”

“Few productions can match the colorful exuberance and pulsating energy of this Flute, or field as versatile a cast as this, in which every member sings, dances and drums.”

“A sense of celebration and resilience, that seems to encapsulate the human spirit at its best.”

“You haven’t heard Mozart until he’s been played on marimbas”“Infectious, pulsating performance”

“Leaves you with a rare sense of life-enhancing joy.”

“I took my 16 year old grandson and we both loved it! Really wonderful, goosebumps and all.”