The ShadowWhose Prey The Hunter Becomes

Back to Back Theatre / Australia

What’s so artificial about intelligence, anyway?

When a group of activists with intellectual disabilities holds a public meeting, they discover a history they would prefer not to know, and a future that is ambivalent. As the frank, funny and challenging conversation jumps from topic to topic — factory farming, human rights, the social impact of automation — the presence of an artificial intelligence in the room expands, begging the question: Who precisely is the fittest to survive in the age of AI? The Shadow Whose Prey the Hunter Becomes takes audiences on a journey to remind us all that no one is completely self-sufficient.

This original, imaginative work comes to Boston courtesy of one of Australia’s most recognized and respected contemporary theatre companies. Committed to inclusion for people with disabilities, Back to Back Theatre brings audiences into the world of accessibility and inaccessibility via performers whose real lives intersect with those precise issues on a daily basis.

Back to Back Theater


Back to Back Theatre creates new forms of contemporary performance imagined from the minds and experiences of a unique ensemble of actors with a disability, giving voice to social and political issues that speak to all people.

Based in the regional centre of Geelong, the company is one of Australia’s most globally recognised and respected contemporary theatre companies.

In addition to its professional practice Back to Back collaborates intensively with communities around the world, with a focus on artistic excellence and elevated social inclusion for people with disabilities. 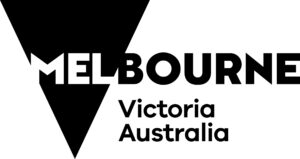 Back to Back Theatre is part funded by the Australian Government Department of Social Services.

This project is supported by an award from the National Endowment for the Arts and by the Barr Foundation through its ArtsAmplified initiative.

The Shadow Whose Prey the Hunter Becomes has been co-commissioned by Carriageworks, the Keir Foundation, the Thyne Reid Foundation and The Anthony Costa Foundation, supported by Creative Partnerships Australia through Plus 1, with development support from the Geelong Performing Arts Centre, Arts Centre Melbourne, Melbourne International Arts Festival, the Une Parkinson Foundation, The Public Theater (New York City) and ArtsEmerson (Boston).The Shadow Whose Prey the Hunter Becomes was developed, in part, at the 2019 Sundance Theatre Lab at MASS MoCA. 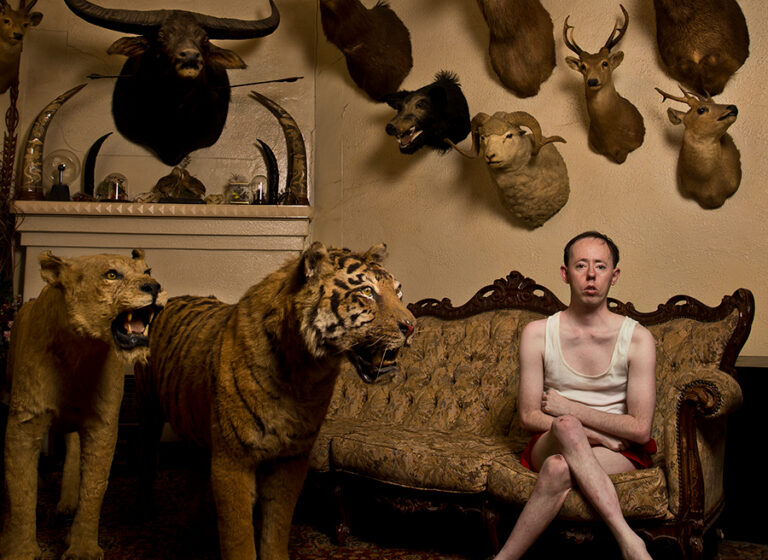 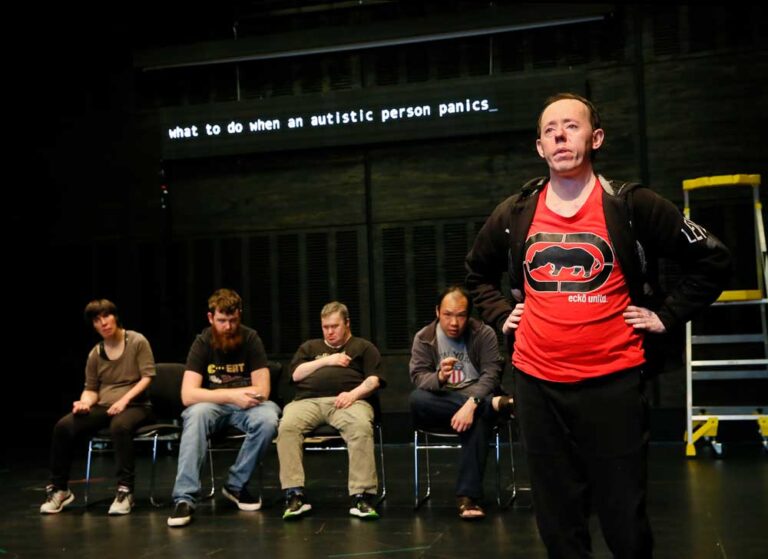 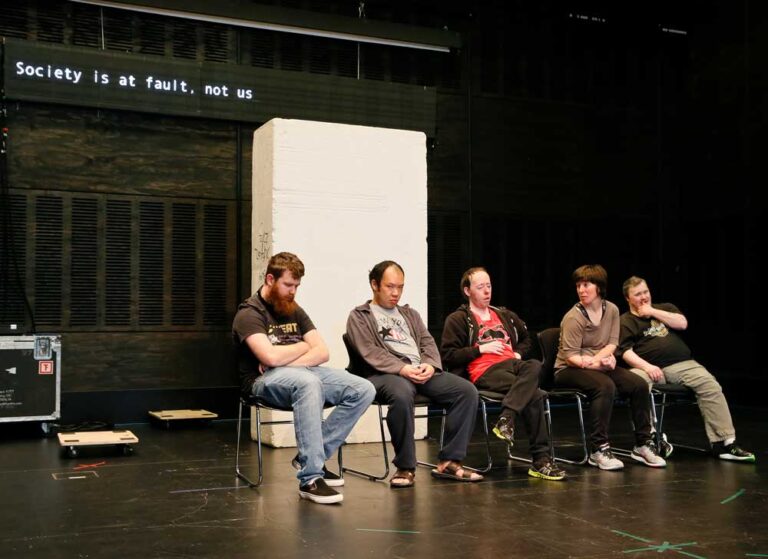 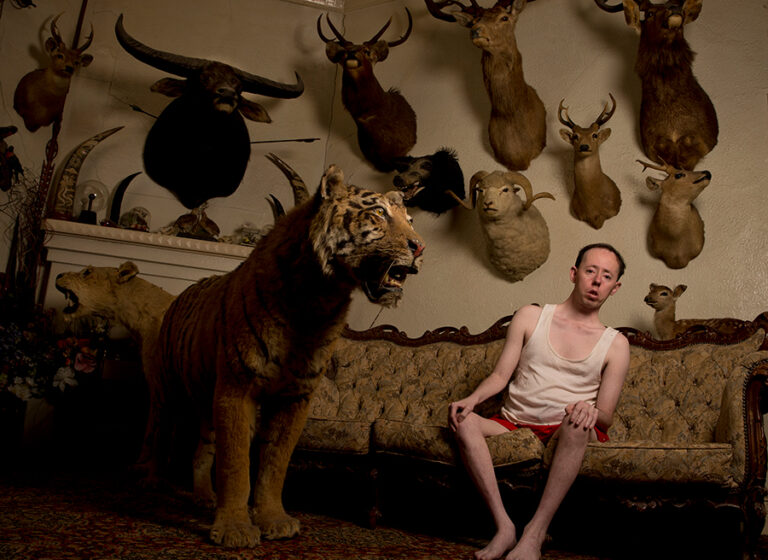 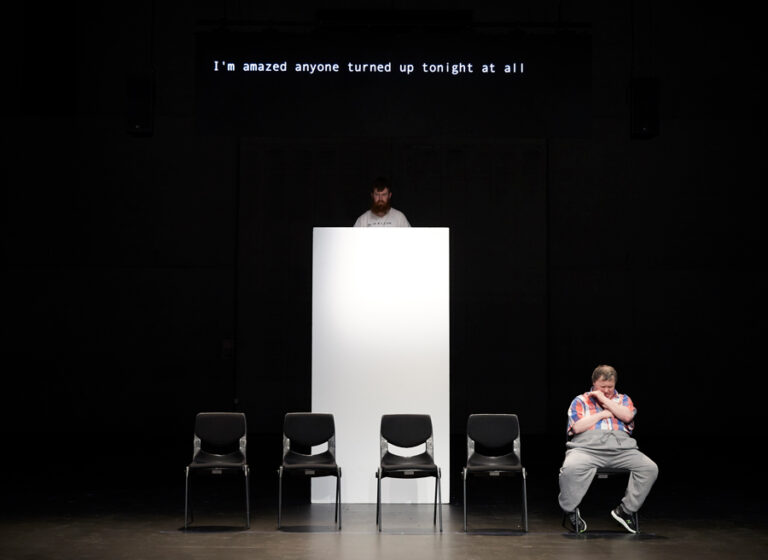 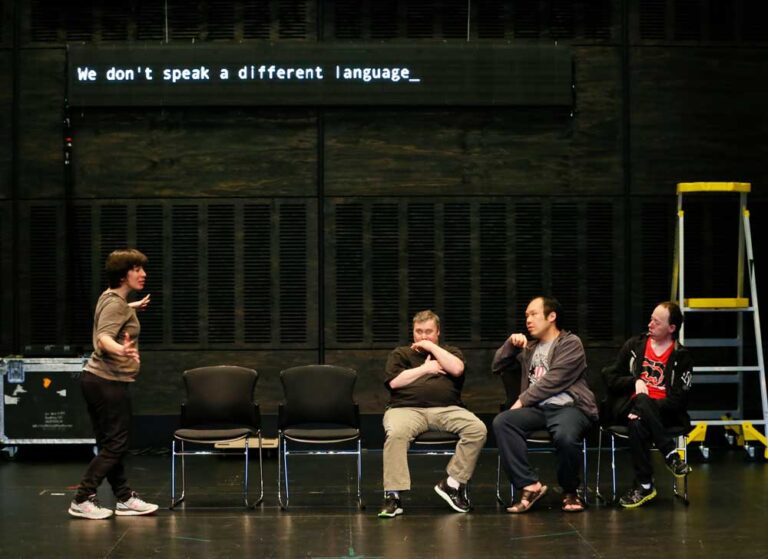 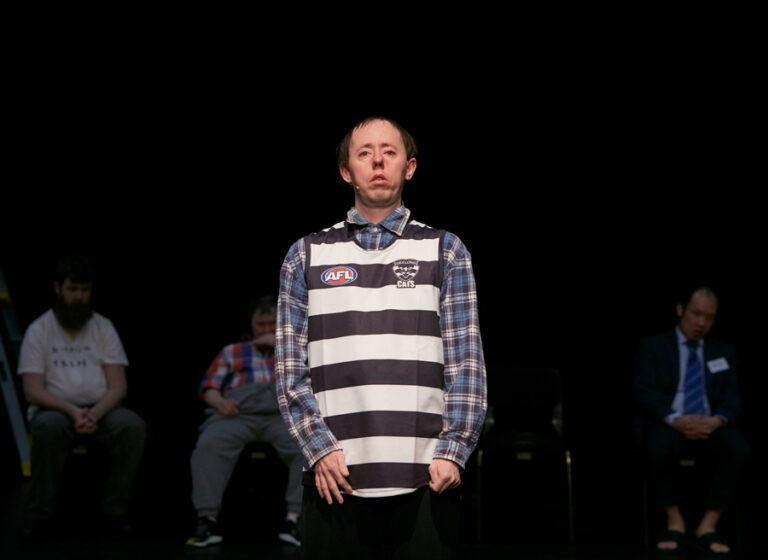 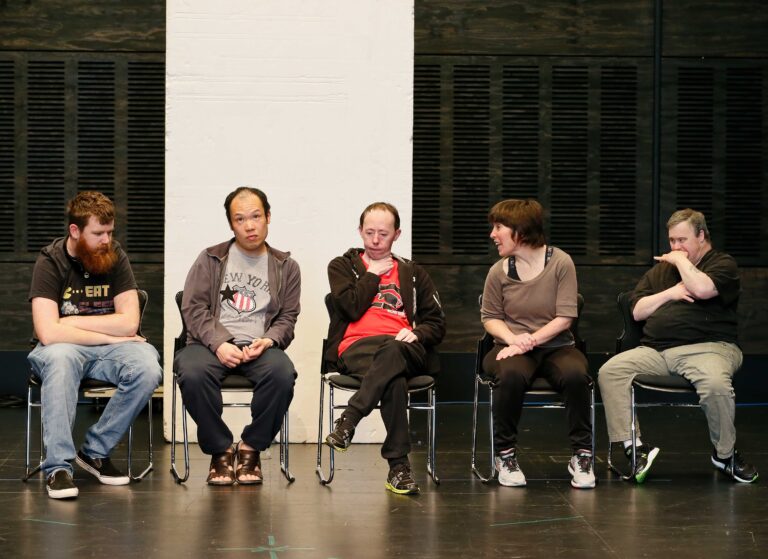 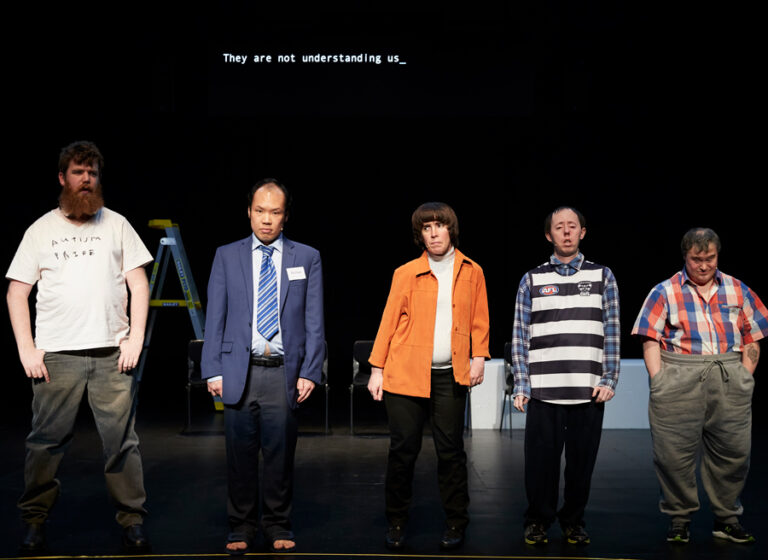 “EYE-OPENING … AN EXTRAORDINARY PLAY. Its sideways development is astonishingly artful. What’s more, it is artful in a way specific to the cognitive profiles of the actors involved. If it moves in unfamiliar ways and is delivered through unfamiliar means, that is a sign that it is delivering new information. These artists are not just making theater that affirms their life experience. They are showing the rest of us how their life experience AFFIRMS, AND ENHANCES, THE THEATER.”

“★★★★★LUMINESCENT!It’s a piece of unexpectedly brilliant theater about which giving too much away would undermine its maximum effect. Don’t let the initially pretentious-sounding title put you off. By the time the import from Australia finishes, its meaning is all too clear and gorgeously pertinent and pungent. Saying anything more detailed than artificial intelligence and its eventual widespread ramifications is a strong focus risks giving away the solar-plexus wallop that ‘The Shadow’ delivers. AN INDISPUTABLE MUST-SEE.”

“THE BEST PIECE I’VE SEEN IN THE FESTIVAL SO FAR.Australia’s Back to Back Theatre worked with acompany of intellectually disabled actors to deviseA BEAUTIFULLY SCRIPTED PIECE. FINELY STRUCTURED AND PERFORMED.”

“MASTERFUL. STRIKINGLY CLEVER.Feels so natural and rooted in realitythat it’s hard to believe it’s a devisedwork of fiction and theatre.”

“The festival’s most rewarding in its complexity. The Shadow Whose Prey the Hunter Becomes is very much about the audience. I wondered: How did they read my mind? This quartet of characters doesn’t include heroes or victims or saints and the play relishes in catching the audience in the act of attaching such labels to the performers.”

“★★★★ Provocative and will leave you with questions. It’ll also make you want to tell your friends to go see it. Now.”

“Back to Back delights in braiding dreamlike, slow-motion dialogue with deadpan comedy, or vigorous physical fracas with heartbreaking monologues.”