The Trip to Bountiful

“IF THIS SHOW DOESN’T MAKE YOU FALL IN LOVE WITH THEATRE, THERE’S NO POTION ON EARTH THAT CAN HELP YOU.”

Cicely Tyson reprises her Tony Award-winning performance as the feisty and funny Carrie Watts in Pulitzer Prize-winning playwright Horton Foote’s beloved American classic The Trip to Bountiful, a story of intergenerational family dynamics directed by Michael Wilson. Living in a cramped apartment in Houston with her dutiful son Ludie (Golden Globe nominee Blair Underwood) and bossy daughter-in-law Jessie Mae (Grammy and Tony nominee Vanessa Williams), the elderly Carrie dreams of making one final journey to Bountiful, Texas, her childhood home. With great determination and daring, Carrie makes her arduous journey back to Bountiful. This American treasure is a masterpiece of the power of childhood, memory, and the undeniable, universal yearning for the warmth of home and family. According to the Wall Street Journal, “The Trip to Bountiful is one of the half-dozen greatest American plays. It is without flaw. I’ve never been more deeply moved by a theatrical production.”

2 hours 20 minutes with one 15 minute intermission

ArtsEmerson: The World On Stage and Jonathan Reinis Productions in association with Center Theatre Group

CICELY TYSON (Carrie Watts) Best known for her groundbreaking double Emmy Award-winning performance as Jane in The Autobiography of Miss Jane Pittman, Ms. Tyson was also nominated for an Academy Award for the film Sounder. Her third Emmy Award was for The Oldest Living Confederate Widow Tells All and she was nominated for her performances in The Trip to Bountiful, Roots, King, Sweet Justice, The Marva Collins Story and A Lesson Before Dying. Her many film credits include The Heart is a Lonely Hunter, Fried Green Tomatoes, Because of Winn-Dixie, Hoodlum, Diary of a Mad Black Woman, Madea’s Family Reunion, Why Did I Get Married Too?, The Help and Alex Cross. In 2013, Ms. Tyson returned to the Broadway stage after a 30-year hiatus as Mother Carrie Watts in Horton Foote’s The Trip to Bountiful. This role not only garnered rave reviews, but earned Ms. Tyson the triple crown of theatre awards: the Tony, Drama Desk and Outer Critics Circle awards for Best Actress in a Play. In addition to a record number of NAACP Image Awards, in 2010, Ms. Tyson became the 95th recipient of the prestigious Spingarn Medal, the highest honor presented by this esteemed organization. This year Ms. Tyson added additional Honorary Doctorate degrees from both Columbia University and American Film Institute for her artistry to her impressive list of honors. Other Broadway credits include The Corn Is Green, Trumpets of the Lord, A Hand is on the Gate, Tiger, Tiger Burning Bright, The Cool World and Jolly’s Progress. In 1997, Hollywood honored Ms. Tyson with a star on the world famous Hollywood Walk of Fame. In 1995 a middle school in East Orange, NJ, was named for Ms. Tyson and following her continued active involvement, she was able to open a new $143 million state-of-the art, 300,000 sq. ft. campus renamed the Cicely L. Tyson Community School of Performing and Fine Arts to educate students kindergarten through high school.

VANESSA WILLIAMS (Jessie Mae Watts) After starring on Broadway last season as Jessie Mae Watts in the Tony and Emmy Award-nominated adaptations of Horton Foote’s The Trip to Bountiful, Vanessa is thrilled to bring her wickedly funny performance to the Ahmanson Theatre! She also reprised her role for Lifetime’s television adaptation, which was nominated for a 2014 Emmy Award. Throughout her career, Vanessa has maintained a reputation as one of the most respected and multi-faceted entertainers in the world. She has conquered the musical charts, Broadway, television and motion pictures. She has sold over 20 million records worldwide and has garnered 11 Grammy nominations. She received a Tony nomination for her portrayal of The Witch in Into the Woods, and starred in the seven-time Tony-nominated musical After Midnight. Her other stage credits include Sondheim on Sondheim and Kiss of the Spider Woman on Broadway and St. Louis Woman for Encores. Her TV credits include her three-time Emmy-nominated performance as Wilhelmina Slater in Ugly Betty, Renee Perry in Desperate Housewives and Olivia Doran in 666 Park Avenue. Her movie credits include Soul Food, Dance with Me, Eraser, Johnson Family Vacation and Tyler Perry’s Temptation. A proud mother of four children and bestselling author with her own mother Helen for their memoir You Have No Idea, Vanessa is living her dream.

BLAIR UNDERWOOD (Ludie Watts) Award-winning actor, director and producer Blair Underwood, who recently appeared as Othello at The Old Globe in San Diego, is equally at home in the worlds of theatre, film and television. He made his Broadway debut as Stanley in A Streetcar Named Desire for which he received a 2012 Drama League Distinguished Performance Award nomination. His many film and TV credits include Just Cause, Deep Impact, Something New, The Event, Dirty Sexy Money, The New Adventures of Old Christine, Sex and the City, In Treatment (Golden Globe nomination) and L.A. Law (Golden Globe nomination), among many others. He starred in the Lifetime TV movie The Trip to Bountiful with Cicely Tyson and Vanessa Williams and received a Critics Choice Television Award for his performance. He is a Grammy Award-winner for the audiobook of An Inconvenient Truth. He made his feature directorial debut with Bridge to Nowhere. 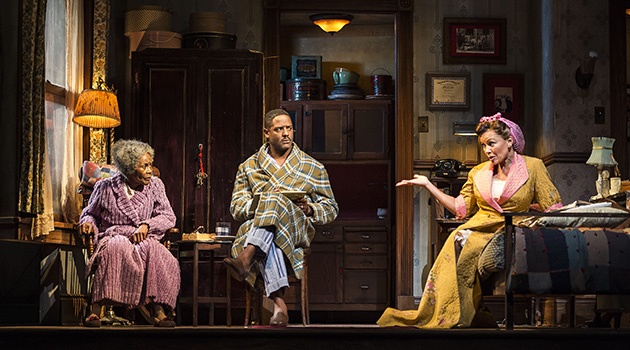 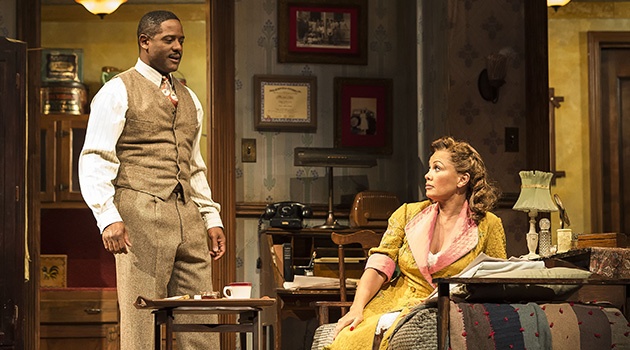 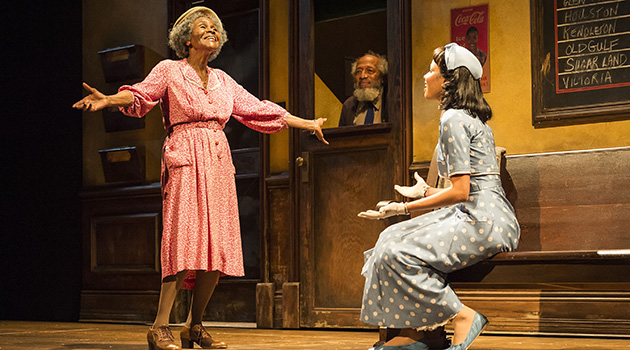 “Performers prove age to be irrelevant”

“Cicely Tyson gets a Boston honor.”

“”The Trip to Bountiful” Comes to Boston.”

“Cicely Tyson stars in “The Trip to Bountiful”.”

“Lifted and transported: Yep, that’s just how those of us in the audience felt.”

“Cicely Tyson’s performance is divine revelation with its sass and delicacy”“Don’t Miss It!”

“What makes this “Trip” so memorable is the privilege to see Cicely Tyson give one of the most important performances of a long, estimable career in a story that at Thanksgiving time aptly celebrates finding the plenty in our
own lives.”
“The theatrical magic, however, is Tyson’s to sprinkle. Now in her 80s, she does so with surprising dexterity and a pixyish sense of humor.”

“Tyson is a marvel…will fill your heart”
“Almost everyone seeks a real-life Bountiful, and Tyson makes it a privilege to be part of that trip with her Carrie Watts.”

“Cicely Tyson is luminous”
“Timeless and invigorating”
“Nothing short of exquisite”

“[Tyson’s] performance is riveting”
“Vanessa Williams… is superb.”
”Achieves what so many other plays fail to do – convey both the universal and specifically American experience that all of us share.”

“The cast includes Vanessa Williams and Blair Underwood, but it is 80-something Cicely Tyson, reprising her Tony-Award-winning role, who steals the show.”
“A super woman who says she’ll never tire, doing the work she loves.”

“The Trip to Bountiful” is almost inexplicably
magical.”
“All the accolades in the world couldnʼt, however, do justice to whatʼs going on at the Cutler Majestic Theatre, where this sweet, yet simple story has become a theatrical experience youʼll be talking about for a very long time.”
“Carrie Watts’ trip to Bountiful isn’t the only once-in-a-lifetime trip being taken at the Cutler Majestic.”

“Cicely Tyson’s ‘Bountiful’ performance a delight”
“Portraying a woman who is fierce in will and fragile in body, Tyson’s performance celebrates the risks and power of acting itself.”
“Tyson’s Mrs. Watts draws all into her journey to Bountiful, including us.”
“As Carrie Watts, Tyson delivers the thrill of watching a great actress in the role of a lifetime.”

“RUSH to get your tickets now!”

“A testament to the enduring power of the human spirit”
“Luminous performances of award-winning TV and film actors Cicely Tyson, Vanessa Williams and Blair Underwood”

“Tyson is giving a performance for the ages.”
“Frail but feisty, willful yet humble, rueful and resilient, her Carrie is pretty much perfection.”
“Not-to-be-missed”

“Cicely Tyson is finally getting the showcase she deserves”

“Tyson brings an inherent grace and dignity, as well as gumption, sly humor and knowing glances that make her endearing and believable”

“Tyson is an icon and a chance to see her live is worth the price of admission.”
“She doesn’t just play Mother Watts; she is Mother Watts.”

“There are laughs — in many cases, big laughs — where I don’t recall them being before in this lovingly performed, pitch-perfect recreation of the 2013 Tony Award-winning production, with Tony winner Tyson and Vanessa Williams and reprising their Broadway roles and Blair Underwood joining the cast.”
“It isn’t the grand, sweeping gestures that make for great actors and actresses.”

“She’s lively, delightful, and pixie in the role.”

Tyson’s inviting “Trip to Bountiful” at the Ahmanson Theatre

Michael Wilson’s revival of Horton Foote’s The Trip to Bountiful , which has just opened at the Ahmanson Theatre, premiered on Broadway in 2013 to a bounty of praise and nominations, especially for Cicely Tyson, who won the Tony Award for her portrayal of Mrs. Carrie Watts.

For Tyson, it’s been a long but rewarding trip to “Bountiful”

It’s rare that an actor gets a third act, let alone a fourth, in a typical show business career. But Cicely Tyson is in the midst of a two-year journey — from Broadway, to television, back to the stage — in a watershed role, playing Carrie Watts in a revival of Horton Foote’s 1953 drama “The Trip to Bountiful.”

Cicely Tyson Makes a Joyful Noise in “THE TRIP TO BOUNTIFUL”

Horton Foote’s THE TRIP TO BOUNTIFUL is an enduring piece of 1950s Americana that tugs at the heartstrings with simple elegance. Free of modern-day cynicism or amped up pyrotechnics, this poignant telling of one woman’s struggle to return home before she dies quietly burns with the fire of dreams and desires thwarted by the realities of a hardscrabble life.

Boston Accent: Home on the Stage

How fortunate for Boston that the revival of Horton Foote’s 1953 classic The Trip to Bountiful runs through the Thanksgiving holiday. Audiences can expect an extra helping of joy and more reasons to give thanks as they journey—along with Tony Award-winner Cicely Tyson, Vanessa Williams and Blair Underwood—to the literal (and figurative) land of Bountiful—and redefine what it means to “go home.”

Twenty-six years. That’s how long it took for Cicely Tyson to get her next great role, her “bountiful” role. It all started in 1985 when she first saw actress Geraldine Page’s performance of Carrie Watts in Horton Foote’s, The Trip to Bountiful, which garnered Page an Academy Award for Best Actress.