“COMPELLING. We are inside Chekhov’s world and hearing his voice.”

A luminous retelling of Chekhov's masterpiece

One of Russia’s premiere theatre companies presents this luminous retelling of Chekhov’s masterpiece, which follows three sisters who are forced to leave Moscow for life in a provincial town. The family bravely confronts the tragic rift between personal desires and harsh, everyday realities. In this surprisingly sexy and emotionally raw production, Three Sisters gives us the chance to reflect on issues of economic recession and class disparity through the lens of the personal, cultural and political changes that shook Russia at the end of the 19th century. Directed by renowned director Lev Dodin and performed in Russian with English surtitles, this staging is a testament to the legacy of one of the world’s greatest playwrights.

3 hours, including one intermission

Performed in Russian with English surtitles.


The Maly Drama Theatre was established in Saint Petersburg in 1944, a time when many theatres were evacuated from the city. Founded by the Regional Executive Committee, the small company performed in the region’s towns and villages until the mid-70s when current artistic director Lev Dodin and other well-known artists joined the company. Dodin first staged The Robber by Karel Chapek in 1975; in 1983, he became Artistic Director. Maly Drama Theatre is currently regarded as one of the top theatres in Russia and has garnered worldwide acclaim for its inventive productions.


Music used in the performance by:

At Prosorov’s house family and guests are celebrating Irina’s nameday. But the mood isn’t too festive. Olga can’t help remembering their father’s death. Masha is bitter. While their father was alive, all family holidays were celebrated by dozens of brilliant military guests, and now there are only two suitors – tall and awkward baron Tuzenbach who is desperately in love with Irina and the caustic and crude officer Soleniy, who follows Tuzenbach around. Doctor Chebutikin, disillusioned with life and fond of the girls for their dead mother’s sake, makes a disproportionately expensive gift of a silver samovar to Irina. The head of the local council Protopopov never turns up and just sends a cake – a disproportionately familiar gift.

Irina dreams of work – and Tuzenbach supports her passionately. His dream is to work together with her. Olga is not convinced – she works 12 hours a day at school and teaching private lessons. Their brother Andrei – though the girls expect him to become a great scholar – is restlessly waiting for a young local miss Natasha to make an appearance. The new battery commander colonel Vershinin pays them a visit – surely such a tired, lusterless man can’t be from Moscow, from the fabled city the girls were once happy in in their childhood, from the glorious city they yearn to return to. Kuligin, Masha’s husband is just on time – he is serious and proper. His affection makes Masha even more bitter. Tuzenbach finds a private moment to plead with Irina about the benefits of honest work – she does not allow him to speak of love. Natasha arrives – is her belt too tight or just ridiculous? Junior officers Rode and Fedotic rush in to congratulate Irina – everyone poses for a group photo, listening to the ominous almost non-existent sound of the top. At the table the guests joke good-naturedly about Natasha’s marital prospects, hinting in a very genteel way that she might be considered spoilt goods. Natasha rushes out of the room – Andrei follows her. She’s so delicate and beautiful. He proposes. She accepts.

A year has passed. Masha and Vershinin enter from the snow storm. He complains of his unhappy life – an insane wife, two small daughters, pointless military service in the province – and declares his love for Masha. She’s happy – but they are interrupted by Irina returning from hated telegraph service and by Tuzenbach who is seeing her home. Vershinin and Tuzenbach lock in a philosophic dispute – Vershinin insists that happiness is a thing of distant future, Tuzenbach ardently contradics. He wants to believe in the possibility of happiness here and now – if only Irina would return his love. Rode, Fedotik and Soleni arrive with small gifts – Prozorov girls are hosting are winter party, mummers are expected. But the evening does not go according to plan – Vershinin gets word that his wife has tried to poison herself yet again, Soleni insults Natasha who blabbers about her new-born son, Tuzenbach and Soleni have a heart-to-heart, Dr Chebutikin, protective of Irina, insults Soleni. After mentioning several times to no avail that her baby is ill, Natasha cancels the party and asks Andrei to get rid of the noisy guests. They leave, Soleni stays behind and has a romantic moment with Irina. She is first attracted to him, then horrifies with her own frivolity. Natasha uses the moment to ask Irina to move to Olga’s room and give her own room up to Natasha’s baby. Natasha, after spoiling the party for everyone, leaves for a horse ride with her old friend Protopopov. Irina is left alone and dreams of Moscow.

Another year has passed. The city is on fire – military is trying to put it out. At the same time the Prozorov house is metaphorically on fire too: Natasha puts Anfisa, the old nanny, in her place, Dr Chebutikin goes on a binge, Olga has a moment of weakness and tries to seduce Kuligin, Masha and Vershinin are too in love with each other to hide their love, Irina is rude to Soleni thus provoking his jealousy, Tuzenbach has resigned from the army and tries – once more and yet again unsuccessfully – to declare his love for Irina. Three sisters confront Andrei who confesses of heavy drinking and he gambling debts. Natasha is as horrified as the girls. Irina pleads with Olga to go Moscow.

Another year goes by. The army is leaving the city – Rode and Fedotic are paying the farewell visit to Irina and Tuzenbach, who are soon to be married. Kuligin has been decorated. He is dreading Masha’s parting with Vershinin. Masha’s waiting for Vershinin to come to say his farewell. Dr Chebutikin plans to leave with the army. Everyone knows that because of a rash public exchange Tuzenbach and Soleni are due to duel today – but everyone is too busy with their own fears and woes to actually do something about it. Tuzenbach has a heart-to-heart with Irina – and finally realizes that she could not love him. To marry her would be ignoble – he walks off to the duel rather hoping to be killed. Vershinin finally comes in, assures Olga once more that happiness is impossible and with difficulty managers to tear himself away from Masha. Kuligin – the cuckold husband – consoles Masha in her grief. Natasha supervises two kids, endless nannies and her meek husband Andrei. Protopopov is waiting in the sitting-room to take Andrei’s – ae they actually Andrei’s? – kids for a walk. Three sisters are sitting down before the road – Irina is going away to be married. Dr Chebutikin comes in with the news that Tuzenbach is killed at the duel. “I knew it would happen” moans Irina. The future looms – and hardly holds anything nice for the three sisters… 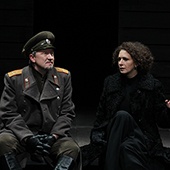 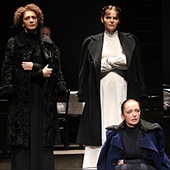 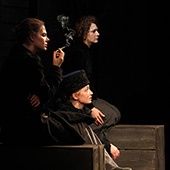 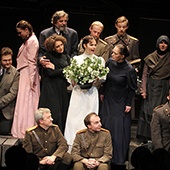 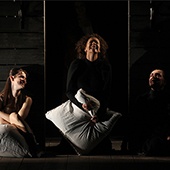 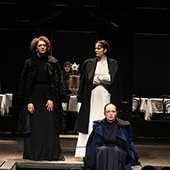 “If you like your Russian playwrights straight up, you can take a deep drink of the strong stuff this weekend.”

“All four acts … spoken in Russian, no less. And it’s wonderful.”

“You feel that the director and his very fine actors have fully internalized this work, and earned the right to shade Chekhov’s text with the insights they’ve uncovered.”

“Why did I love St. Petersburg’s Maly Drama Theater’s production of Chekhov’s Three Sisters? Let me count the ways”

“Their ensemble work is flawless”

“They spoke their lines as though they were performing music”

“I’m deeply grateful to Arts Emerson for bringing the Maly Drama Theatre to Boston and hope for more.”

“Filled with ribald passion and humor”

“The entire ensemble demonstrates just how comic the work is”

“Lev Dodin’s production is marked by emotionally vibrant, precisely detailed performances in virtually all of the significant roles.”

“Chekhov’s characters are the great warriors who are opposing the tragic laws of life. . . . They keep struggling until the very end.” – Director Lev Dodin

“Everyday life is not a passive existence without actions. It’s full of passion.” – Director Lev Dodin

“…it’s a dreamlike version, in which the characters act out their deepest fantasies and most fervent desires, offering new insights into figures we thought we knew from college drama class.”

“…a reverent, incisive offering that matches Chekhov’s text, if not nuance for nuance, with an equally generous spirit at least.”

“The Maly Drama Theater’s interpretation resists such casual dismissal by truly owning the play’s despair, and showing us a world that can’t be escaped, an inertia and a slow loss of all real hope.”

“There’s laughter (much of it through tears) and there’s naïve hope and philosophy. There’s kissing and pillow fighting, awkward jokes, and catty snark. These are unquestionably living people, which makes it all the harder that they’re dying inside.”

“More than 110 years after Three Sisters’ premiere, we still don’t really know why we suffer and feel trapped, or what we plan to do about it. All that’s left is a fierce gratitude that we can, in fact, lift up our heads and walk out of the theater, into a life of promise.”

“a superb revival from Maly Drama Theatre of St. Petersburg”

“Director Lev Dodin is judicious in his adaptation”

“[Lev Dodin’s] bold, brilliant interpretations have given the world the unique opportunity to see Chekhov’s beautiful, elusive works in a new light—as if for the very first time.”

— This Week in New York

“The wonderful Maly Drama Theatre of St Petersburg did an outstanding job of reviving Anton Chekhov’s Cherry Orchard from the dusty shelves of the last century.”

“a refreshing piece of genius by Director Lev Dodin”

“Dodin was able to successfully draw the audience in, without breaking the plays structure and meaning”

“the artistic vision that Dodin shared with us was sometimes exquisite, sometimes as powerful as a hammer hitting an anvil”

“a first-rate cast in an exemplary production”