Triptych(Eyes of One on Another)

Composed by Bryce Dessner (guitarist for GRAMMY Award–winning band The National), featuring libretto by korde arrington tuttle and poetry by Essex Hemphill and Patti Smith, and sung by the eight-person choral ensemble Roomful of Teeth, Triptych is a once-in-a-lifetime collaboration of artists and art forms. Mapplethorpe’s uncanny ability to upend beliefs on race, gender and politics in both edifying and reckless ways is celebrated and examined here through haunting, unforgettable music and large-scale projections of his work. Triptych is a bold tribute to one of the most brilliant photographers of the 20th century.


Music by Bryce Dessner is used with permission of Chester Music Ltd.

Bryce Dessner is one of the most sought-after composers of his generation, with a rapidly expanding catalog of works commissioned by leading ensembles. Known to many as a guitarist with The National, he is also active as a curator – a vital force in the flourishing realm of new creative music.

His orchestral, chamber, and vocal compositions have been commissioned by the Los Angeles Philharmonic, Ensemble Intercontemporain, Metropolitan Museum of Art (for the New York Philharmonic), Kronos Quartet, BAM Next Wave Festival, Barbican Centre, Edinburgh International Festival, Sydney Festival, eighth blackbird, Sō Percussion, New York City Ballet, and many others. He has worked with some of the world’s most creative and respected musicians and visual artists, including Philip Glass, Steve Reich, Johnny Greenwood, Justin Peck, Hiroshi Sugimoto and Matthew Ritchie, among others. His work ‘ Murder Ballads,’ featured on eighth blackbird’s album Filament — an album he also produced and performs on — won the 2016 Grammy Award for Best Chamber Music/Small Ensemble Performance. In the fall of 2015 Dessner was tapped, along with Ryuichi Sakamoto and Alva Noto, to compose music for Oscar Award-winning director Alejandro Iñárritu’s film, The Revenant, which received a 2016 Golden Globes nomination for Best Original Score and a 2017 Grammy Awards nomination in the Best Score Soundtrack For Visual Media category.

korde arrington tuttle is a multi-disciplinary artist from Charlotte, NC. His plays include FAMILY’S FIRST FUNERAL (LCT3), CLARITY (Soho Rep.), and GRAVEYARD SHIFT (Goodman Theater, Fall 2018). He is currently head writer on MIXTAPE, a new musical series from Netflix set for premiere in 2019. He is a recipient of New York Stage and Film’s 2018 Founders’ Award, 2018 Falco / Steinman Commission Award at Playwrights Horizons, 2018 Playwrights Initiative Fellowship at the Djerassi Resident Artists Program + was selected as a finalist for both the 2017 Alliance/Kendeda National Playwriting Contest + City Theatre National Award for Short Playwriting Contest. Korde is a playwright-in-residence at Lincoln Center Theater, Resident Artist at Ars Nova, and Middle Voice Theatre Company member at Rattlestick Playwrights Theatre. His debut collection of haiku + photography, falling is the one thing i, was published by Candor Arts, in May 2018. Korde completed his undergraduate studies at UNC Chapel Hill and received his MFA at The New School.

Brad Wells is the founder and artistic director of the Grammy Award-winning new music vocal group Roomful of Teeth (praised by WQXR as “the future of vocal music”). Wells has led the ensemble in premieres of over 75 works by many of today’s leading composers including Judd Greenstein, Caroline Shaw, Rinde Eckert, Sarah Kirkland Snider, Missy Mazzoli, Glenn Kotche, Terry Riley, Ted Hearne, and Julia Wolfe, among others. Roomful of Teeth’s debut recording (2012), directed by Wells and praised as “sensually stunning” by the New York Times, included the Pulitzer-winning composition, “Partita for 8 Voices,” written by ensemble member Caroline Shaw. His own compositions—featured on the group’s Grammy-nominated second album, Render (2015) – have been described as “objectively and subjectively gorgeous” (I Care If You Listen). Wells’ permanent sound installation Silo Songs, featuring the earliest vocal music of the Shakers, opened at Hancock Shaker Village in 2018. Since 1999 Wells has been Artist in Residence in Vocal Music at Williams College. He has held conducting and teaching positions at Yale University, Trinity College, and University of California at Berkeley. A champion of Estonian choral music, he has led the US premieres of works by Estonian composers including Raimo Kangro, Jüri-Ruut Kangur, and Lembit Veevo. He has lectured and published articles on the physiology and acoustics of non-classical vocal styles. As a singer he has performed and recorded with such ensembles as Theatre of Voices and Philharmonia Baroque Orchestra (under Nicholas McGegan and Philip Brett).

Roomful of Teeth is a GRAMMY-winning vocal project dedicated to mining the expressive potential of the human voice. Through study with masters from singing traditions the world over, the eight-voice ensemble continually expands its vocabulary of singing techniques and, through an ongoing commissioning process, forges a new repertoire without borders.

Isaiah Robinson (Performer), tenor, is a multi-talented musician who was born in Chicago into a musical family of sing-ing parents. As an actor he was featured in Steven Spielberg’s 1991 film Hook, playing the role of Pockets. He has also appeared in several radio and television commercials as a child; most notably, “That’s My Baby” for Johnson’s Baby Shampoo, a Polaroid commercial featuring the come-dian Sinbad as well as advertisements for Kraft, McDonald’s, Wendy’s, JC Penny, Sears and for Eagle Foods. As a vocalist he was primarily trained singing in church by his parents and his siblings which lead to his performing on several jingles and voice-overs for various products and companies. He has performed with several pieces for composer Ted Hearne, includ-ing Katrina Ballads, The Source and Place. Other art-ists include the Barrett Sisters, Darius Brooks, Aretha Franklin, R. Kelly,Pattie LaBelle,Ted Hearne, Rascal Flatts, Joan Collaso, Rene Marie, Kim Stratton, Ted Hearne,Jonita Lattimore, the Brown Sisters, Twinkie Clark Terrell, Kelvin Lenox, Mavis Staples, Janis Siegel, Chaka Khan, Ted Hearne, Yo-Yo Ma, Chance The Rapper, Angela Davis, Candy La Flore, Jeff Morrow, Dennis DeYoung and Ted Hearne . Isaiah is currently a teaching artist for the Lookingglass Theatre, City of Chicago After School Matters Program, Urban Gateways and private students in the Chicago area. He also performs with the Stu Hirsh Orchestra, Silent Theatre, as well as various other aggregations. He was the featured vocalist at the inauguration of Rahm Emanuel as mayor of Chicago. He performs with and facilitates workshops for the Chicago Children’s Choir, and is on staff as a musician/organist and choirmaster at the Life Center C.O.G.I.C. in Chicago, where he has served for more than 16 years. 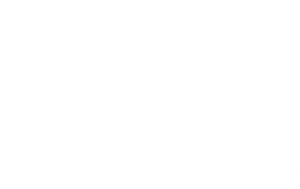 Triptych is presented by ArtsEmerson in association with Celebrity Series of Boston and New England Conservatory.

TRIPTYCH was commissioned by ArtsEmerson.

Supported in part by the Andrew W. Mellon Foundation.

Produced in Residency with and Commissioned by University Musical Society, University of Michigan, Ann Arbor, MI. 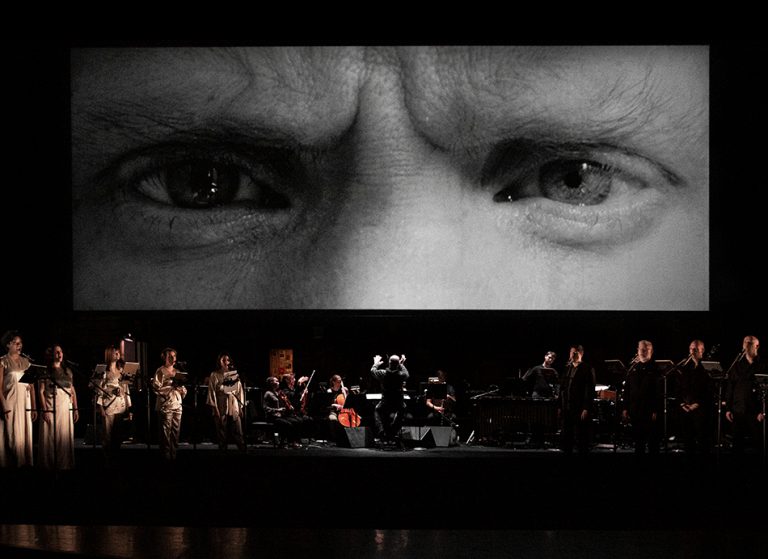 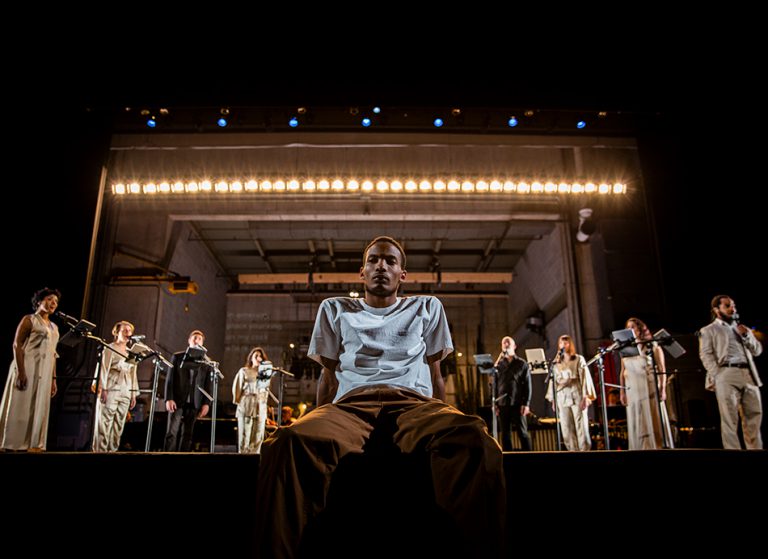 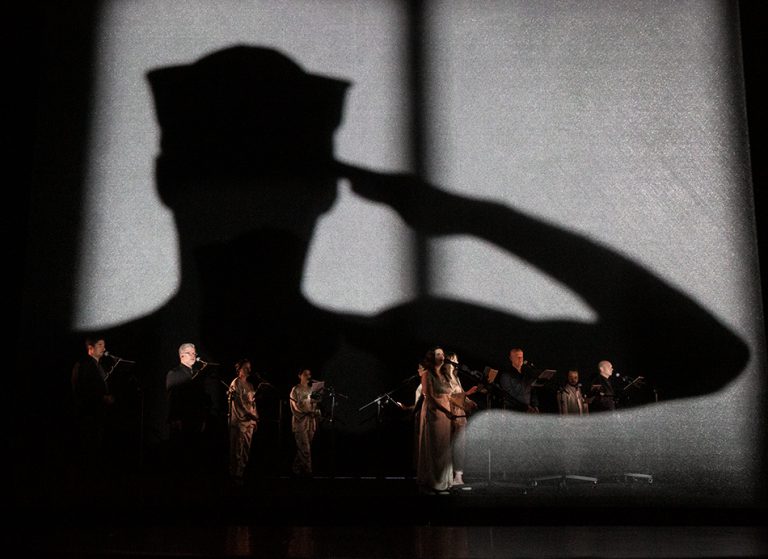 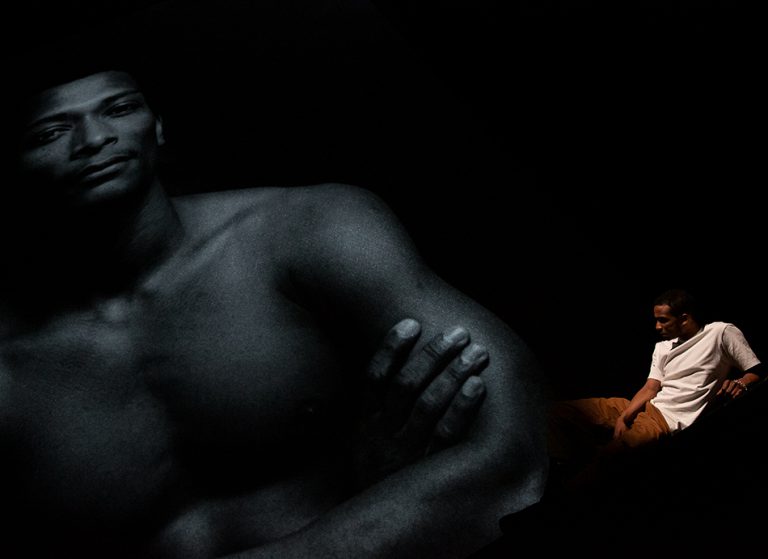 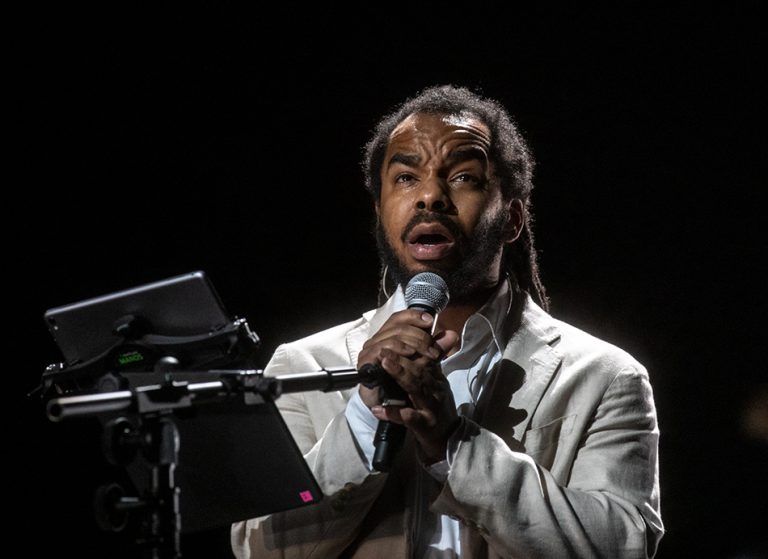 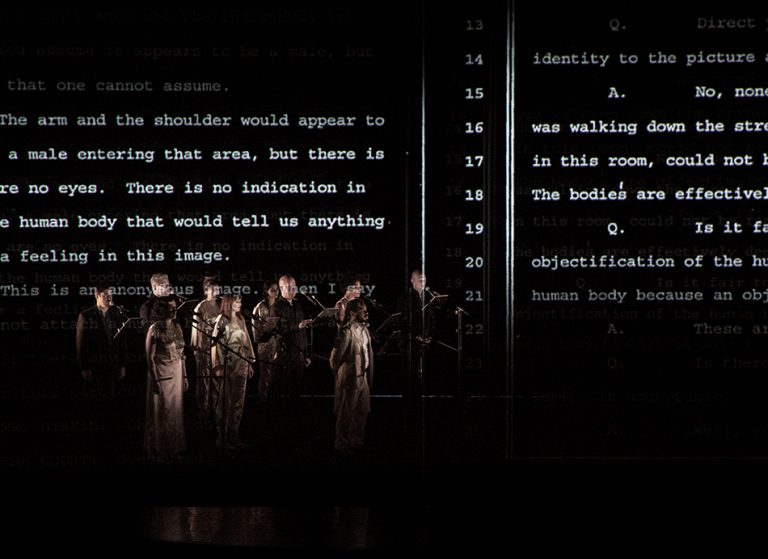 “Triptych explores the very limits of artistic expression for an age in which almost nothing seems shocking.”

“One of my friends commented that although he’d seen many shows at ArtsEmerson, this one seemed to generate the most discussion afterwards. What more can one ask from a work of art?”

“IT ISN’T SO MUCH A PORTRAIT OF MAPPLETHORPE AS A MEDITATION ON THE MAN, HIS WORK, AND HIS LEGACY.”

“Triptych (Eyes of One on Another) serves up a cool emotional package: the vocal wizardry of Roomful of Teeth, the eye-catching photographs of Mapplethorpe, and the dense poetry of Smith and Hemphill.”

“Sentimental and ferocious. Triptych accomplishes what art does best, which is to serve as a pointer toward further thought.”

“A re-examination and an exaltation of the photographer’s enduring imagery, with its classical beauty and raw eroticism.”

“Dessner’s music was melodically involving and wonderfully performed…like ghostly mournful cries, which underscored the serious intent…two thrilling soloists…not just about Mapplethorpe’s legacy but also a statement about how we suspiciously live in America.”

“A radical new work…there was no singular emotional direction a work of this scope could portray, and composer Bryce Dessner fluidly swept us from the awe-inspiring cathedral, to the cold and calculating courtroom, to the intimate bedroom with a score that surged with electricity, sparkling clarity, and biting poignancy.”

“What came through most clearly – often thrillingly – was the score…Gorgeous vocal sound for its own sake…Moran…delivered the goods with authority…My overall impression was one of the sheer joy of singing.”

“Witty and wicked…forbidding and seductive…Dessner is at his best…The language is stylized and extravagantly poetic, matching the photographs’ explicit sexual content while meeting their cool elegance with punk Romanticism.”

“Dessner personifies what appears to be a generational shift in musicians.”

“A man who slips in and out of musical guises with disarming ease…this is gorgeous and full-hearted music.”