In America, it should not be impossible to dream.

WET: A DACAmented Journey is a true story of what it means to be an American in every sense of the word except one: on paper. Written and performed by Alex Alpharaoh—an award-winning actor, director, spoken word artist and teaching artist—who knows firsthand the emotional and psychological hardship of this unending process; he risks his own freedom to share his story in this nationwide tour. WET rockets between hilarity and heartbreak to capture one man’s relentless journey toward becoming a documented citizen.


ALEX ALPHARAOH is an award-winning stage and film actor, writer, director, producer, spoken word artist, solo performer, and teaching artist from Los Angeles. He has performed in various venues and open mics throughout Los Angeles, including Da Poetry Lounge, Sunday Jump, Washington D.C.’s Busboys and Poets, and New York’s renowned Nuyorican Cafe. As a teaching artist, Alpharaoh teaches a highly popular Fundamentals of Spoken Word and Performance Poetry class, advising individuals how to connect with their deeper selves, using their words and expressions as a form of healing. Alpharaoh is the creator of SP!T: Spoken Word Theatre, a series he originally developed at Urban Theatre Movement, where he is a founding member. He went on to produce a full run of Hollywood Fringe’s 2015 world premiere of his spoken word play Don’t Talk About It, SP!T About It at the CASA 0101 Theater in the summer of 2016. SP!T continues to grow in popularity, including a special one-night performance that was part of Da Poetry Lounge’s 1st Annual L.A. Get Down Festival this past April.Alpharaoh had a chance to act alongside his daughter, Aileen Alfaro, in Urban Theatre Movement’s Hollywood Fringe production of Urban Unrest, which won the 2017 Premiere Award, presented by Rogue Machine Theatre, and for which he also served as executive producer. Several of his one acts and full-length plays have been produced at companies such as EST/LA, UTM, Antaeus Co. and CASA 0101 Theater. Alpharaoh developed this latest solo show, WET: A DACAmented Journey,at EST/LA, a place he has called home. WET is a story about being a new kind of American in search of the old dreams that may not exist in our country anymore. The play was chosen by Human Rights Watch Student Task Force to be the focus of this year’s action initiative program. The show was originally workshopped through EST/LA’s True Story, Winterfest, and Fuel Workshop programs, and received a residency at Hi-ARTS NYC.    The Los Angeles production was recognized with Best Solo Performance by the LADCC, and Ovation Award nominations for both Best Playwriting for Mr. Alpharaoh and Best Production for Ensemble Studio Theatre/Los Angeles. 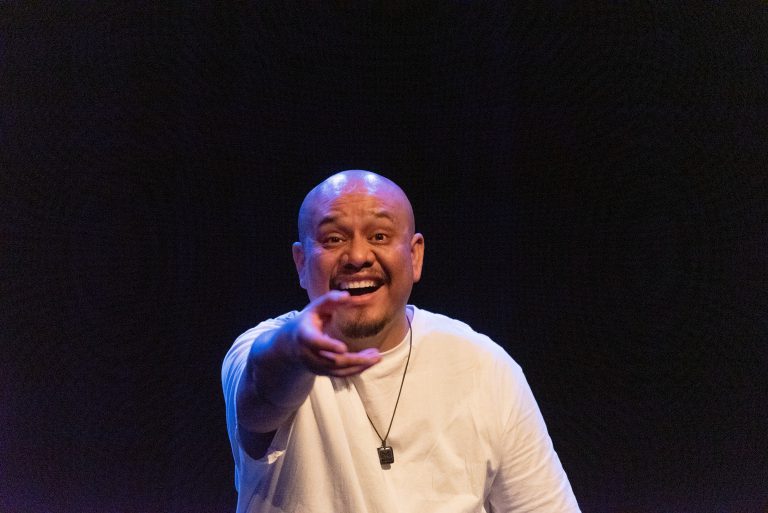 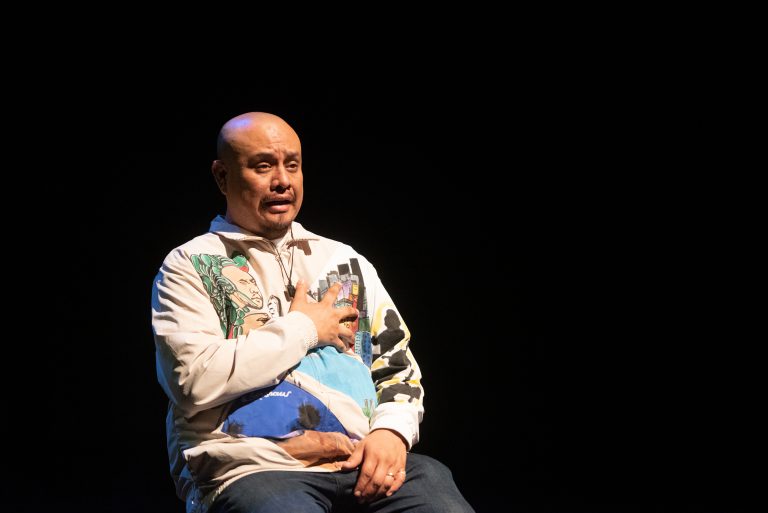 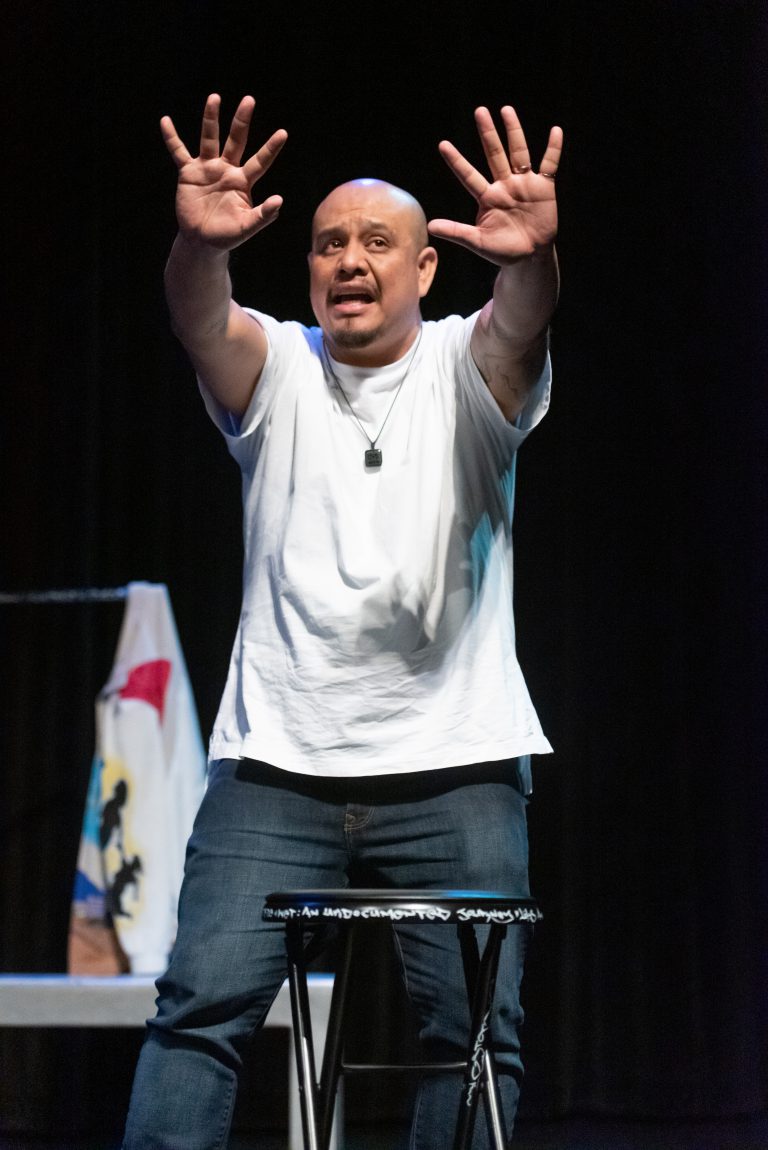 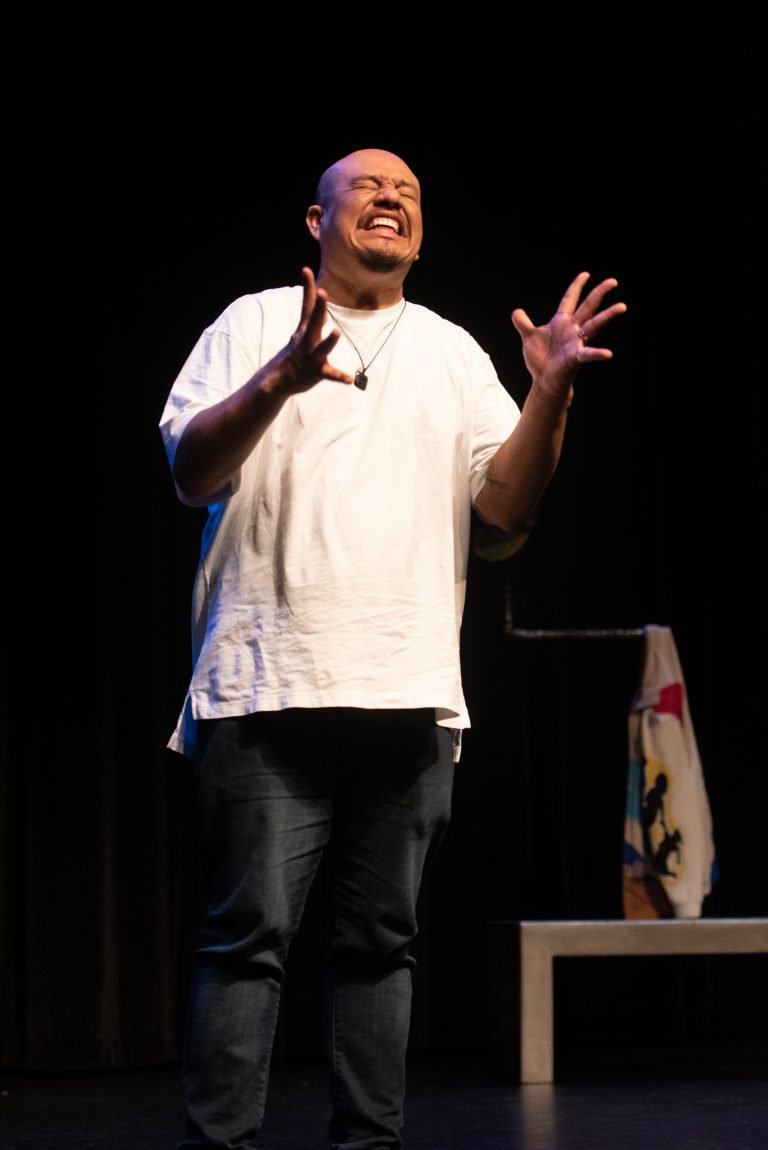 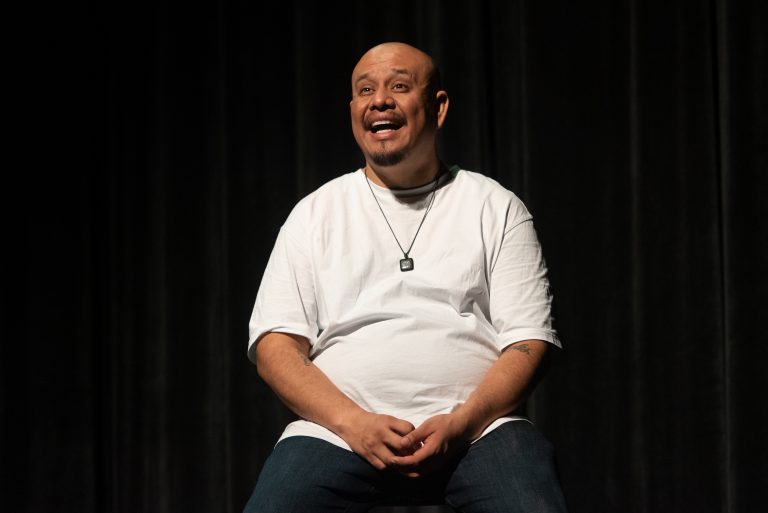 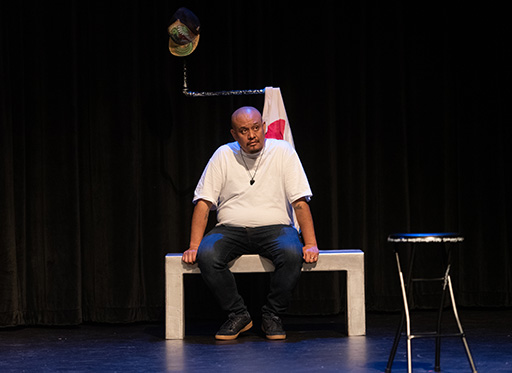 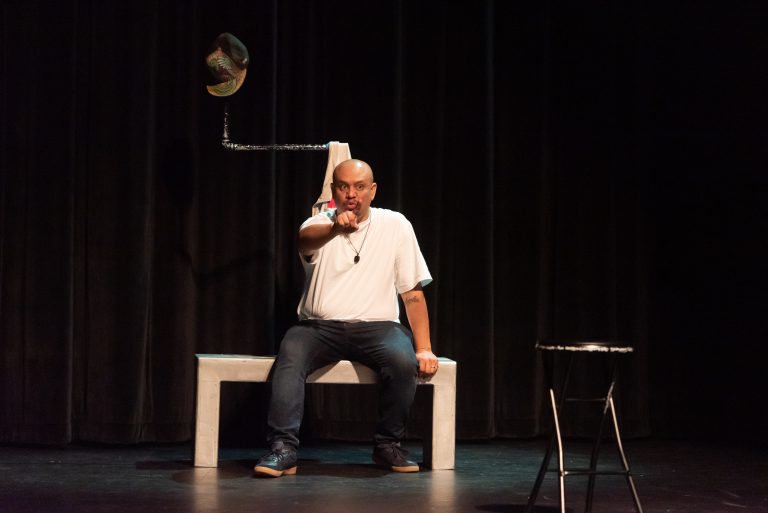 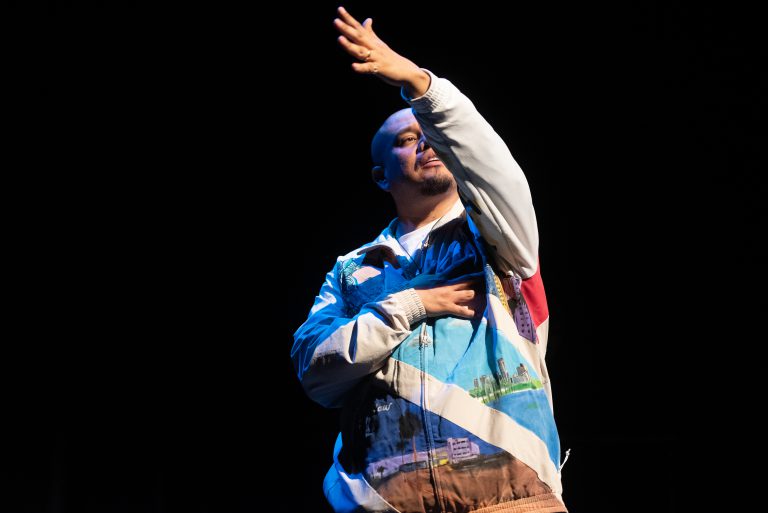 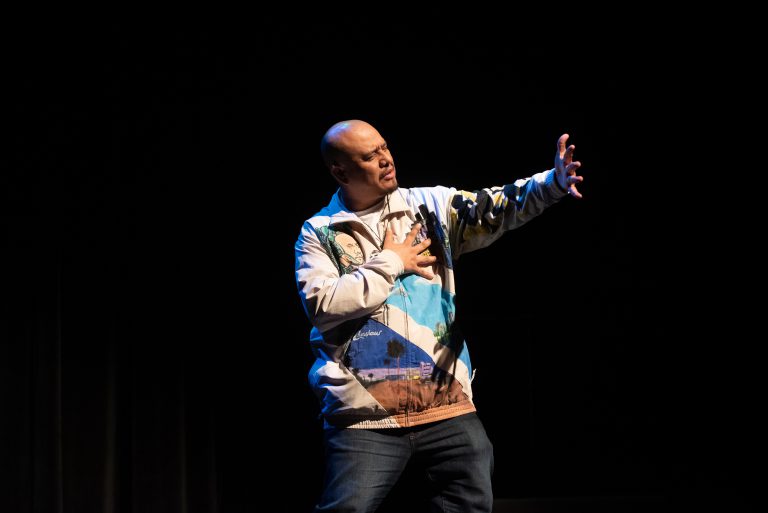 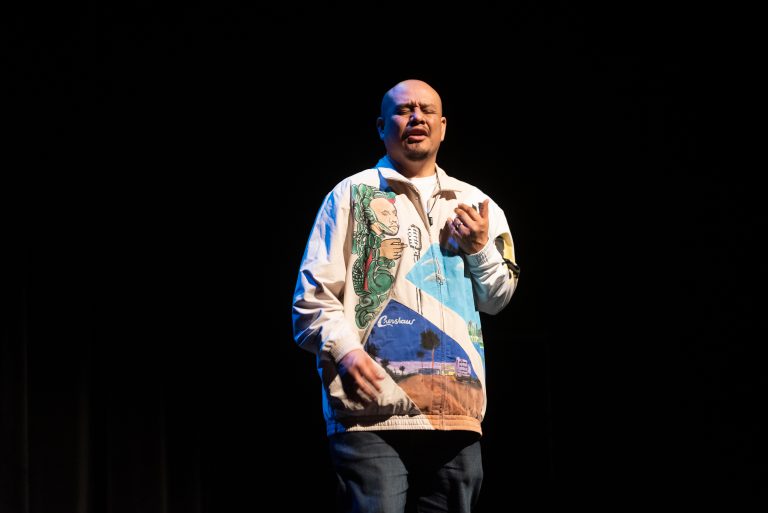 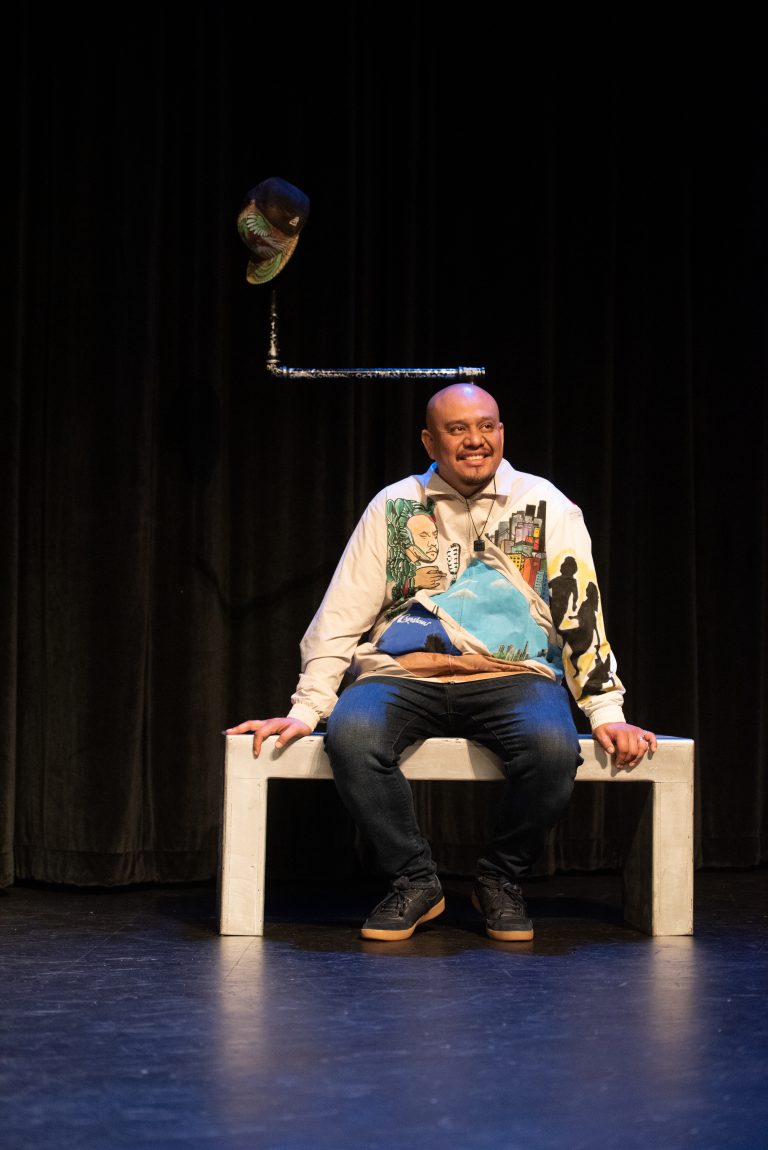 “Alpharaoh is a passionately expressive performer, and in “WET,’’ which he wrote, he draws upon one of the signal strengths that live theater possesses: an up-close intimacy between storyteller and audience that enables us to walk — or at least imagine walking — in the shoes of another.”

“If you attend one production this year, this is the one to see.”

“It is a riveting and entirely engrossing 90 minutes that you will not soon forget.”

“Combines autobiography, political mission and hip-hop-inflected spoken word to put the audience in Alpharaoh’s shoes — and you feel every springy step and chafed toe.”

“WET: A DACAmented Journey is a must-see for many reasons, but foremost is the aesthetic qualities of the narrative structure and the honest acting. While the subject matter of this piece could have easily fallen into a pull-on-the-heartstrings melodrama, it avoids such emotional manipulation. Equally important is the social and political importance of its theme, which asks us to see undocumented persons in their full humanity and not just as some histrionic statistic made up by ultra-right-wing political marketing campaigns. The play begins and ends with the same request: ‘I need you to see me.’”

“Some actors get stage fright before a show. Alex Alpharaoh gets life fright. As an undocumented adult, he’s aware of taking a risk every time he performs his autobiographically inspired one-man show, WET: A DACAmented Journey, with audiences. But he feels compelled.”

“Merely by turning up at the theater, he has put himself in legal harm’s way. It’s not hyperbole.”
“Delivers Nail-Biting Suspense…as expertly ratcheted as any Hitchcockian suspense thriller”

“Alpharaoh offers a sympathetic presence in the middle of a controversial issue.”

“Alex Alpharaoh is simply INCREDIBLE [in] WET: A DACAmented Journey. This should be on Netflix.”

“I loved WET, and the conversation with the playwright that preceded the play. I am grateful for ArtsEmerson’s commitment to bring us plays that address critical, and complicated issues in our times.”

“Alex’s performance was so incredibly powerful — charged with honesty, humanity, urgency, resilience, and hope…Thank you for bringing voices like Alex’s to our city. Just like with The Peculiar Patriot, which I saw recently as well, I feel more connected to my fellow Americans when I can more viscerally understand their pain and struggle…Thank you again for making art like this available to Boston audiences.”

“This was one of the most powerful performances I’ve EVER seen. Alex physically and emotionally embodies a 10 year old, a worried mom, a customs officer, an abuelo and other characters with completely believable ease. He had me hugging my knees riveted to my seat, heart pounding in empathy and anticipation. Go see this. Go see this. Go see this!”

“Phenomenal–I will be recommending it to everyone I know!”