Blog What is Step?

In their show, Drumfolk, dance troupe Step Afrika! uses the art of stepping to tell a story of African American history, one inspired by the Stono Rebellion of 1739 and the Negro Act of 1740. Stepping or step dancing is “a percussive dance in which the participant’s body is used to produce complex rhythms and sounds through a mixture of footsteps, spoken word, and hand-claps,” writes the African American Registry.

Step has its origins in Africa, as dancing has been a large part of traditional African culture for centuries. Dance was present in daily life as well as a form of celebration on special occasions. As Africans were forcibly brought to the Americas and Carribbean through the slave trade, their style of dance adapted and evolved, while still keeping their cultural beliefs and traditions alive. 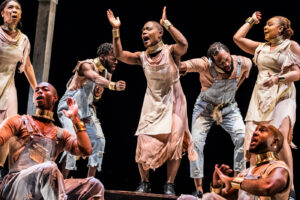 Step as a style and form of African dance in of itself first appears in the 1700s. In the United States, slaves would play the drums as form of entertainment and as another way to keep their traditions alive. They soon discovered that by playing certain beats or hitting the drum in a certain way, it could mimic a sound similar to human speech. Slaves started to use drumming as a way to communicate with one another, one that their white owners could not understand or detect. In the wake of the Stono Rebellion of 1739, drumming was outlawed in an effort to stop communications between slaves. Around this time is when the style of step dancing was first recorded. Since stepping is percussive and mimics sounds similar to that of the drums, step was able to replace drumming in both the cultural and entertainment aspect as well as being used as a channel of communication.

Jumping forward over a century, we arrive in the early 1900s. Black Americans are allowed to attend schools and universities, and have prominent business careers. In 1904, the first all-Black fraternity was founded, Sigma Pi Phi, as a way for Black professionals and businessmen to build relationships and community. In the years to come, many more Black fraternities and sororities would be established. Fraternities and sororities often have songs or chants they perform to build community amongst members, to relay their values as a group, and on special occasions like initiations into the organization. These songs evolved to sometimes include coordinated movements or dances. For some Black Greek Letter Organizations, this evolved into the use of step. Some organizations have their own signature step routine, to go along with their song or chant. There would even be fraternity step performances put on at Howard University starting in the late 1970s. This culminated in a nationally aired stepping contest in 1992, S.T.O.M.P., and was choreographed by the Alpha Phi Alpha fraternity. 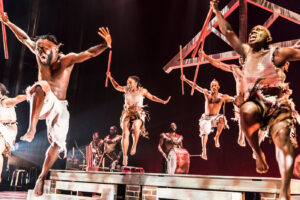 Step Afrika! was formed in 1994 by C. Brian Williams. Under the leadership of Williams, Step Afrika! has become one of the top stepping troupes in the country and helped solidify the practice of step in the mainstream dance world. In their most recent production, Drumfolk, they return to the roots of stepping, a practice created in a time of utmost oppression and violence as a plea for freedom and change.

There is still time to see Drumfolk before it closes on Sunday, October 16, 2022! Learn more and reserve seats here.